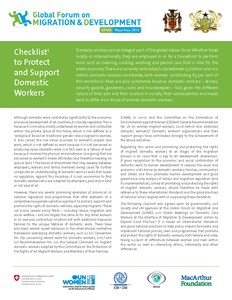 Domestic workers are an integral part of the global labour force. Whether hired locally or internationally, they are employed in or for a household to perform work such as cleaning, cooking, washing and person care that is vital for the wider economy.

There are currently estimated to be between 53 million and 100 million domestic workers worldwide, with women constituting 83 per cent of this workforce. Men are also sometimes hired as domestic workers – drivers, security guards, gardeners, cooks and housekeepers – but, given the different nature of their jobs and their location in society, their vulnerabilities and needs tend to differ from those of women domestic workers.

The “Checklist to Protect and Support Domestic Workers,” is based on international standards and good national practices and is meant to help policy-makers formulate and implement national policies, laws and programmes that promote and protect the rights of domestic workers, both female and male.

Progress on the Sustainable Development Goals: The gender snapshot 2022

7 September 2022
Progress on the Sustainable Development Goals: The gender snapshot 2022