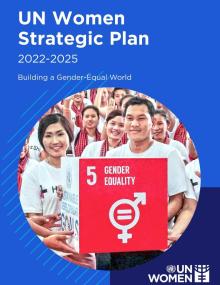 UN Women Strategic Plan 2022–2025
The Strategic Plan 2022–2025 will guide UN Women for the next four years—with an eye toward the 2030 deadline to achieve the Sustainable Development Goals. It articulates how UN Women will leverage its unique triple mandate to mobilize urgent and sustained action to achieve gender equality and the empowerment of all women and girls and support the achievement of the 2030 Agenda for Sustainable Development. More
Share

Making zero tolerance a reality: Peer-to-peer learning to prevent and eliminate sexual harassment in the UN system and beyond
This publication presents an overview of the reflections on the peer-to-peer learning dialogues organized as part of the outreach and knowledge sharing efforts of the Chief Executives Board for Coordination Task Force on Addressing Sexual Harassment within the organizations of the UN system.

Improvement in the status of women in the United Nations system: Report of the Secretary-General (2021)
This report assesses the status of women in the UN system for the period from 1 January 2018 to 31 December 2019. It contains recommendations aimed at assisting entities in the UN system to achieve gender parity, including through rigorous implementation of policies and a range of coordinated actions.

The Secretary-General’s “System-wide strategy on gender parity” includes six UN Women–specific recommendations, which were incorporated and highlighted in UN Women’s initial implementation plan (December 2017). As requested by the Secretary-General, this status report and updated implementation plan elaborates on the progress made and results achieved since 2017, based on the specific requests for UN Women. It also reports on UN Women’s system-wide work, as well as internal progress.

Insights on organizational effectiveness and efficiency: A meta-synthesis of UN Women evaluations
This meta-synthesis brings together evidence from evaluations of UN Women’s organizational effectiveness and efficiency outputs. In addition to highlighting progress, the synthesis captures commonly identified drivers of change in the form of good practices and innovation, as well as impediments.

Achieving an enabling environment as the norm: Implementing the guidelines
This report provides a summary of the Global Annual Meeting of Gender Focal Points and Focal Points for Women in the United Nations, held in October 2018.

Enabling environment: Engage, exchange, equip
This report provides a summary of the Global Annual Meeting of Gender Focal Points and Focal Points for Women in the UN, organized in November 2017 in Geneva.