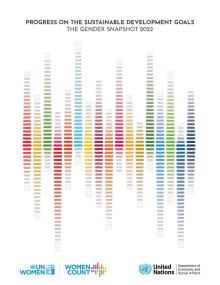 UN Women Strategic Plan 2022–2025
The Strategic Plan 2022–2025 will guide UN Women for the next four years—with an eye toward the 2030 deadline to achieve the Sustainable Development Goals. It articulates how UN Women will leverage its unique triple mandate to mobilize urgent and sustained action to achieve gender equality and the empowerment of all women and girls and support the achievement of the 2030 Agenda for Sustainable Development.

The Secretary-General’s “System-wide strategy on gender parity” includes six UN Women–specific recommendations, which were incorporated and highlighted in UN Women’s initial implementation plan (December 2017). As requested by the Secretary-General, this status report and updated implementation plan elaborates on the progress made and results achieved since 2017, based on the specific requests for UN Women. It also reports on UN Women’s system-wide work, as well as internal progress.

Key stakeholders&rsquo; perspectives for UN Women&rsquo;s next strategic plan
This report presents key stakeholders’ perspectives around UN Women’s strategic plan 2022–2025 based on a survey conducted in 2020 as part of global, regional, and country consultations. The report covers key reflections on UN Women’s work to-date and strategies for achieving greatest impact, and for ensuring the next strategic plan navigates the entity well into its second decade and throughout the first half of the Decade of Action to deliver on the Sustainable Development Goals.

Global Innovation Coalition for Change members handbook 2017–2019
The GICC is a dynamic partnership between UN Women and key representatives from the private sector, academia and nonprofit institutions focused on developing the innovation market to work better for women and to accelerate the achievement of gender equality and women’s empowerment. This booklet outlines information on each of the GICC members.

UN Women Strategic Plan 2018–2021
The Strategic Plan 2018–2021 outlines UN Women’s strategic direction, objectives and approaches to support efforts to achieve gender equality and empower all women and girls. It supports the implementation of the Beijing Declaration and Platform for Action and contributes to the gender-responsive implementation of the 2030 Agenda for Sustainable Development.

Making innovation and technology work for women
The 2030 Sustainable Development Goals, founded on the principle of 'leaving no one behind' call for transformative shifts, integrated approaches, and innovative solutions to overcome the structural barriers to sustainable development. Innovation and technology provide unpreceded opportunities to reach those who are the most likely to be left behind.

Guide on NGOs that provide services to migrants
This publication presents results from a Moldovan study on services provided for migrants, including returnee women. It provides key recommendations for actions to improve services destined to migrants, particularly to returnee women, and to create a dialogue platform for migrant women to access existing services. Furthermore, it includes a list of the most relevant NGOs that provide services for migrants in Moldova, including contact details and information about specific services offered.