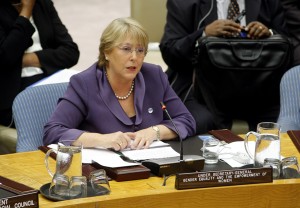 United Nations, New York, 27 October 2010 - UN Under-Secretary-General for UN Women, Michelle Bachelet, has commended the UN Security Council for its willingness to accelerate progress on historic resolution 1325 on women, peace and security. The Council marked the 10th anniversary of the resolution, which made historic commitments to women, peace and security, through an Open Debate yesterday that considered a stronger implementation, monitoring and accountability framework. More than 80 Member States delivered statements to the Council.

?The Security Council is better equipped than ever before to ensure that women engage in peace talks and to build a stronger protection environment for women,? said Ms. Bachelet, referring to the Security Council?s Presidential Statement issued at the end of the Open Debate. This statement encourages use of a comprehensive set of indicators on 1325, proposed by the Secretary-General, for improved monitoring of the results of efforts by the UN and Member States to implement resolution 1325.

?All that is needed now to move from policy to action is determined leadership. We all know that women count for peace. But for them to count for peace, they need all of us.?

Resolution 1325 acknowledges that women and men experience conflict differently, and have different needs for protection and recovery. But these needs are often ignored, while women remain sidelined in peace talks and post-conflict planning. Member States participating in the Security Council debate agreed that despite the resolution?s intentions to correct these imbalances, implementation should improve.

The Security Council reviewed a new report from the Secretary-General on women, peace and security. It proposes a comprehensive set of indicators to track implementation, along with recommendations on how the Security Council could better respond to information on women in conflict. ?The indicators will provide the evidence base that is badly needed for better monitoring,? said Ms. Bachelet.

The Secretary-General, earlier this month in a report on peacebuilding, also proposed priority actions to ensure women?s participation in peacebuilding, raise low levels of post-conflict financing for gender equality and women?s empowerment, and improve gender expertise in urgent recovery efforts.

The Security Council meeting is expected to help expedite future implementation of resolution 1325 and related resolutions addressing prevention of sexual violence, protection of civilians and peacebuilding. Twenty-three UN Member States have now endorsed national 1325 action plans. As part of the tenth anniversary of resolution 1325, Member States have been announcing and tracking commitments to improve their performance, by, for instance, contributing more women troops and police to UN peacekeeping, providing financial incentives to delegations to peace negotiations to include women and increasing the proportion of post-conflict funding dedicated to women?s empowerment.

Ms. Bachelet applauded ?the manifest determination of so many of the United Nations Member States to step up their commitments.?

UN Women will support coherence and coordination across the UN system in advancing women?s participation in conflict resolution. UN Women will support existing and new efforts to improve the protection environment for women during and after conflict, to engage women in conflict prevention, and to ensure peacebuilding processes are guided by women?s perspectives and address their needs.