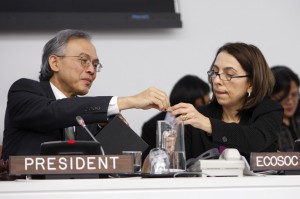 Member States today took the next step in enabling the newly-created United Nations agency on gender equality and women's empowerment to begin its work by electing countries to serve on its Executive Board.

The elections, held in the 54-member Economic and Social Council (ECOSOC), are an important milestone in establishing the governance structure of the UN Entity for Gender Equality and the Empowerment of Women (UN Women).

The 41 board members were selected on the following basis: 10 from Africa, 10 from Asia, 4 from Eastern Europe, 6 from Latin America and the Caribbean, 5 from Western Europe and 6 from contributing countries.

Bangladesh, China, India, Indonesia, Kazakhstan, Japan, Malaysia, Pakistan, Republic of Korea and Timor-Leste were elected from among the Asian States.

In addition, the Council elected Argentina, Brazil, Dominican Republic, El Salvador, Grenada and Peru from the group of Latin American and Caribbean States.

The 35 members elected from the regional groups will serve two-year and three-years, beginning today, as determined by the drawing of lots.

The new agency was established on 2 July by a unanimous vote of the General Assembly to oversee all of the world body's programmes aimed at promoting women's rights and their full participation in global affairs. One of its goals will be to support the Commission on the Status of Women and other inter-governmental bodies in devising policies.

It will also aim to help Member States implement standards, provide technical and financial support to countries which request it, and forge partnerships with civil society. Within the UN, it will hold the world body accountable for its own commitments on gender equality.

In carrying out its functions, UN Women will be working with an annual budget of at least $500 million — double the current combined resources of the four agencies it comprises.