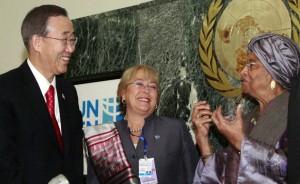 “We need to empower African women who produce food, raise children and drive the economy, the UN Secretary-General said. “When women take their rightful place at the negotiating table, in the parliament and in leadership positions across society, we can unleash Africa's enormous potential. UN Women is here to help reach this goal.

“A vision of how much more is possible when men and women have equal rights and opportunities will drive UN Women, Ms. Bachelet said. “We will be bold and ambitious in our aspirations. We will also be practical in building an organization that can make a lasting difference in women's lives.

UN Women integrates four existing UN organizations, with a greater concentration of resources and expertise expected to accelerate gender equality efforts. It will focus many of its efforts on national programmes, including in the 48 African countries it currently supports. One early action will be to bolster the capacities of its existing network of 26 country and sub-regional offices in Africa. Programmes will emphasize priorities in individual countries under framework issues where results can unlock progress across other areas: women's economic empowerment; leadership; peace and security; ending violence against women and national planning.

The new organization's main activities will involve advocating for gender equality, and providing expertise to assist countries in establishing policies, programmes and resources for achieving it. UN Women will work globally with UN Member States to forge international standards and goals for gender equality. It will also lead the UN system in coordinating the efforts of all other UN agencies in advancing gender equality in their programmes, increasing efficiency and impacts on women's lives.

The agreement to create UN Women came from a July 2010 UN General Assembly resolution. On 1 January 2011, the new entity became operational under the leadership of Ms. Bachelet, the former President of Chile. Her attendance at the Africa Union summit marks her first official visit outside UN headquarters in New York.

Almost all African countries have now ratified the Convention on the Elimination of All Forms of Discrimination against Women (CEDAW). Many have improved literacy rates for women, and seven African countries are among the top 25 countries in the world in terms of women's participation in parliament. Major gaps persist as well, however. Eighty-four percent of women workers are in informal sector jobs that offer no protection or benefits, for example. Only a handful of women have participated in peace processes, even though nearly a third of African countries face some form of conflict or crisis.

Related News
17/06/2022
From where I stand: “I see positive change through the power of women’s organizations and adolescent peer groups in our community.”
30/04/2018
Remarks by Under-Secretary-General of the United Nations and Executive Director of UN Women, Phumzile Mlambo-Ngcuka at the African Women Leaders Network: Second Women Leaders Forum for Africa’s Transformation
10/07/2015
Ahead of Financing Conference, women’s groups highlight critical gender equality issues
10/07/2015
Women’s groups galvanize for Financing for Development Conference
08/07/2015
Press release: Transformative financing will end gender inequality by 2030
END_OF_DOCUMENT_TOKEN_TO_BE_REPLACED