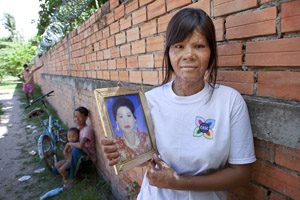 A cook in the Cambodian city Siem Reap, Chhean was compelled to take action against her sister's tyrannical husband when in 2008 he sold his two-year-old daughter to a trafficking ring so he could buy a new motorbike.

Chhean, a widow and sole provider for her four children, urged her sister Baen to file a law suit and openly demanded that her brother-in-law get the two year old back. Instead, her brother-in-law threatened Chean's life. That threat turned real one day when he drove by on his motorbike while Chhean was working and threw acid on her. It burned her face, eyes, shoulders, left hand and the left side of her back.

Another woman, Ponleu experienced the same form of violence. At 18 she married an older man who was emotionally and physically abusive. Ponleu endured his abuse and gave birth to a daughter, before she gathered the strength to ask for a divorce. The man doused Ponleu with gasoline and lit her on fire, in front of their three-year-old daughter.

In Cambodia acid attacks and burns violence against women are common and widespread, yet many survivors of such violence often find themselves in the dark for adequate legal, medical and psychological support. For Chhean, medical care at the local hospital was too expensive. Thinking that she would never be able to work again and support her family, she battled with thoughts of suicide. Ponleu spent all her savings on medical treatment and, ashamed of how she looked, stayed indoors at home as much as she could.

Chhean and Ponleu, however, later found support through the Cambodian Acid Survivors Charity (CASC) — which receives support under the umbrella organization Acid Survivors Trust International (ASTI). A UN Trust Fund to End Violence against Women grantee, ASTI focuses on combating acid burns violence at the international level and works with local partners such as CASC to take measures to prevent acid burns violence and to bring perpetrators to justice.

The only organization in Cambodia offering holistic support to survivors of acid burns violence, CASC runs a commune where survivors can access a range of services and support from medical treatment and legal assistance to skills training and peer support. Here, Chhean and Ponleu receive continuing medical care, and assistance with employment.

Chhean now crochets bags, purses and backpacks, which CASC helps her sell. Ponleu has become a seamstress and works for CASC as an assistant pressure garment tailor. She sews hospital scrubs and regularly gets orders from hospitals around the area. Through CASC, she has also educational support for her daughter.

At the national level, CASC has contributed to draft legislation to regulate the sale of acid and to provide harsher criminal sentences to perpetrators. There is hope that the draft will be signed into law — the first of its kind in Cambodia — by early 2012. Such legislation will help burn survivors like Chhean, whose case against her brother-in-law has yet to go to court for lack of finding witnesses willing to cooperate. Had a law been in place before her brother-in-law attacked her, Chhean believes it would have saved her. “I firmly believe that he would have not dared to throw acid on me because he would have been afraid to be sent to prison," she says.

Despite the scars, Chhean and Ponleu continue to build their confidence as survivors and help those around them. Chhean has become a powerful support to survivors of burn violence, accompanying them to court in their battles for justice. Although Ponleu's husband fled after attacking her and has not been found, she is committed to supporting her family, excelling at her job and being a role model for other survivors.

Acid attacks are a widespread human rights violation most often perpetrated against women. Yet many survivors do not have access to adequate legal, medical and psychological support. With support from the UN Trust Fund to End Violence against Women, Acid Survivors Trust International (ASTI) responds to the needs of women and girls affected by acid attacks and implements measures to prevent attacks from happening in the first place and to bring perpetrators to justice. The project serves 2,000 women and their communities in Cambodia, Nepal, and Uganda. (Producer: UN Women; Date of Release: November 2011)

Managed by UN Women on behalf of the UN system, the UN Trust Fund to End Violence against Women is a leading source of support for innovative projects combating one of the most pressing issues of our time. The UN Trust Fund relies on voluntary contributions and your donation is critical! Join us in this vital work. Donate to the UN Trust Fund.
Related News
Burns Violence Survivors rebuild their lives in Nepal
Confronting dowry-related violence in India: Women at the center of justice
Stars of Change: Cambodian Youth Lead the Way for Lives Free of Violence
On the front lines of COVID-19, women’s organizations provide vital services as first responders as violence against women spikes
“From Campaigning to Monitoring”: Making Domestic Violence Laws Meaningful to Women in India
END_OF_DOCUMENT_TOKEN_TO_BE_REPLACED