Brazilian Athletes Join the Global Call to UNiTE against Violence 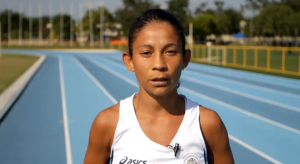 More than 4,000 athletes gathered at the games in Rio de Janeiro in mid-July. The event marks the largest military sporting event ever to be held in Brazil.

A partnership between the United Nations in Brazil, the Brazilian Peacekeeping Joint Operations Centre and the Ministry of Defense made sure that the games became an opportunity to urge people to get involved in preventing and eliminating gender-based violence. A global phenomenon, it affects women and girls from all social classes, cultures and races.

Athletes and spectators at the games viewed UNiTE campaign video messages, brochures and other materials distributed throughout living quarters and competition spaces. UN staff and a volunteer team, mobilized with the support of the Brazilian Peacekeeping Joint Operations Center, fanned out to offer UNiTE backpacks and wristbands. A high point was a presentation of the women's carnival group Grêmio Recreativo Bloco Carnavalesco and Cultural Saias na Folia, an active advocate for ending violence against women.

A special seminar on “Sports, Development and Peace was held during the games at the School of Command and General Staff of the Brazilian Army. Júnia Puglia, Coordinator of Programmes for UN Women in Brazil and the Southern Cone, spoke about the importance of gender perspectives in sports and how this can positively influence peacekeeping operations.

Besides UN Women, other UN supporters of UNiTE activities at the games included the UN Population Fund, the UN Human Settlements Programme and the UN Information Centre.

Related News
25/02/2020
Marta Vieira da Silva and One Win Leads to Another girls celebrate women’s empowerment in Brazil Carnival
11/07/2014
Innovative campaign tackles soccer and violence against women together
06/04/2020
She persists: Sport is a tool for empowering girls in Brazil
25/02/2020
I am Generation Equality: Hingride Marcelle Leite de Jesus, rugby player, community facilitator
23/05/2019
From where I stand: “We are the solution in Brazil, not the problem”
END_OF_DOCUMENT_TOKEN_TO_BE_REPLACED