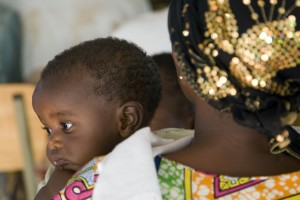 Mother and child at a Village of Hope community centre in Kigali that provides services and emergency housing to women victims of rape and other violent crimes committed during the Rwandan genocide. During the genocide, women were systematically raped by HIV-infected men as part of a campaign to spread the virus. (Photo: UN)

UN Women is supporting a project in Rwanda to provide legal and medical services to widows who survived the 1994 genocide. The project specifically focuses on providing services to widows with HIV/AIDS, thousands of who were systematically raped by HIV-infected men during the genocide to spread the virus.

The Association of Widows of the Genocide AVEGA Agahozo in Rwanda launched the project in the nation's capital, Kigali, last month to coincide with the commemoration of the United Nation's first International Widow's Day on 23 June 2011. The project, Property and Inheritance Legal Support for Genocide Women Survivors Infected and Affected by HIV/AIDS, aims to secure widow's rights and improve their access to legal and medical services, including their access to property and land. In particular, 100 paralegals have been trained to educate HIV-positive widows and genocide survivors about their property and inheritance rights, The paralegals will also provide basic legal advice to beneficiary victims seeking redress or involved in property and inheritance disputes and act as advocacy and liaison officials in such cases.

According to the African Union, more than 250,000 widowed victims registered with the Ministry of Family and Women in Development soon after the genocide ended. Most had lost not only their husbands, but also their property. By 1996 the government was faced with about 400,000 widows who needed help to become self-supporting. Although a law was passed in November 1999 allowing widows the rights to inherit land and their husband's property, widows still remain ostracized in their communities with limited access to services.

Further, during the genocide thousands of women were systematically raped by HIV-positive men as part of a campaign to spread the virus. Out of the 150,000 Rwandans who are believed to be living with HIV, approximately 78,000 are women. A 2005 Demographic and Health study on Rwanda reveals that HIV-positive women are more likely to live in extreme poverty (50.2 percent live on less than US$1 a day) than HIV-positive men (38.6 percent).

In response to this, AVEGA focuses on the rehabilitation of women widowed by the genocide in Rwanda, including mitigation of poverty, reconciliation, fighting for justice and access to property rights.