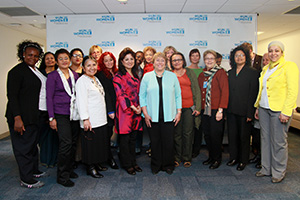 Wednesday 10 October - The first meeting of the Global Civil Society Advisory Group was hosted by UN Women Executive Director, Michelle Bachelet, in New York today. The group was formed following the call for its creation by Ms. Bachelet, earlier this year at the 56th session of the Commission on the Status of Women.

The global group, which comprises 21 civil society members - 18 of whom were in New York to attend this first meeting - had an opportunity to meet with Ms. Bachelet to discuss the current political context and the challenges as well as the opportunities for gender equality and women's empowerment. The meeting covered discussions on policy issues on UN Women's thematic areas. 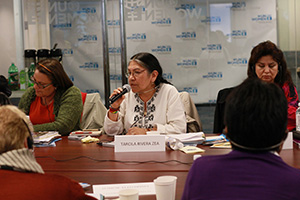 Other key strategic issues on the agenda included the Post-2015 Development Agenda, Sustainable Development Goals (SDGs), the upcoming CSW 57 and Beijing+20. The meeting was also an occasion to launch the Civil Society Advisory Group Extranet, which has been designed as a platform for information sharing between members of the Civil Society Advisory Groups (at the regional, national and global levels). The presentation on the Extranet, by the UN Women Civil Society Section, highlighted the various methods of communicating, sharing and networking through a live demo of the Extranet's work spaces and discussion forums. The meeting concluded with discussions on Strategic partnership and alliance-building to achieve common goals and discussions on ways to move forward. 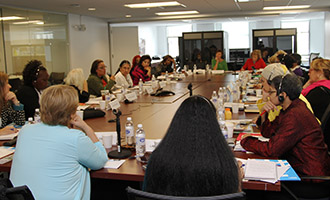