In the aftermath of the Rio+20 United Nations Conference on Sustainable Development and the ongoing discussions to advance the global development agenda beyond 2015, UN Women is hosting and convening an expert group consultation from 26 to 29 November to ensure that gender equality and women's empowerment are fully integrated into any future international development framework. 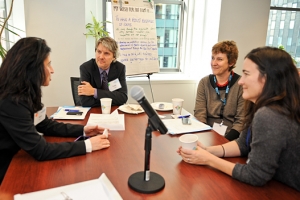 UN Women is taking an active role in the discussions, organizing a series of consultations. Today, the first consultation on Applying a gender perspective to the post-2015 development framework and the Sustainable Development Goals, brings together nearly 40 experts from around the world and representatives of 10 United Nations agencies (ILO, ITC, ITU, OHCHR, UNDP, UNEP, UNFPA, UNICEF, UNIDO and UN-Habitat).

As the 2015 target date for achieving the Millennium Development Goals approaches, discussions are underway among Member States, UN agencies, academia, and civil society on how to frame the global development agenda beyond 2015. In addition, an outcome of the recent Rio+20 Conference was the creation of an inter-governmental platform to develop a set of global Sustainable Development Goals (SDGs). The aim of the expert group meeting is to fully integrate gender equality and the empowerment of women in any future international development framework, both in the post-MDG and SDG agendas.

UN Women advocates for the advancement of women's full participation in governance at all levels, to end all discriminatory barriers faced by women as well as ensure the right to universal access to essential services such as safe drinking water and basic sanitation, energy, education, health, transportation, communication, security and social protection.