Binga women in Zimbabwe make history on the Zambezi River

“I used to sell fish under the trees, and carry fish on my head. I would wake up at 4am to walk a long distance to buy fish from the fishermen. Now I sleep and wake up normal hours, and have my tea before the Captain comes. I never thought I would have time to sleep, eat, work and rest like this!

So reveals Kuli Mungombe, one of ten women who are making history in Zimbabwe by owning and operating a fishing rig in the country. The women, from the Tonga ethnic group, formally entered the male-dominated industry last year after being provided with the rig, equipment and skills training. They have since been working to scale up the venture in Binga, one of the country's least developed districts, so that it can sustain them and their families, as well as create opportunities for other women in the area.

This is the first time since the 1950s that women from their ethnic group have been able to fish at all. Although it was traditionally the Tonga women who fished, using traditional Zubo baskets, aspects of their matrilineal culture changed when the group were displaced by the construction of the Kariba Dam during the colonial era. Their access to resources reduced, and their participation in community fishing ended. 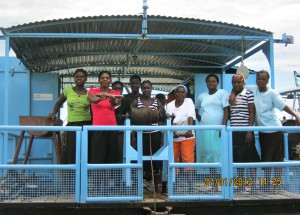 The Zubo Basilizwi Trust, a women-focused development organisation, secured the fishing rig for the women traders in Siachilaba, supported by UN Women. Designed with women in mind, it has toilets and showering facilities, includes special technology such as a fish locator, and is slightly larger than those on most other rigs to provide more stability on the river.

The ten women were selected from a group of 80 fish traders from Siachilaba village after they acquired a fishing licence and passed the required fitness and medical exam. They were initially joined by four male rig operators, who helped train them to handle the operation themselves. The women have built temporary homes nearby on the riverbank, and are devoting themselves full-time, and successfully, to their new jobs: their sales average has doubled from the days prior to the rig, at about US $2,500 per month.

With UN Women, the Zubo Basilizwi Trust is now helping the women to organize into collectives, improve their market stands and conditions in Siachilaba, and also market their fish to Zimbabwe's larger towns and cities. A revolving fund has been set up by the programme to provide them with small loans.

“I grew up knowing that any meaningful business was a preserve for men, not for us women," says rig operator, Sarudzai Mumpande, describing the difficulties the women have traditionally faced. “We have since overcome those challenges because we have organized ourselves into a serious business entity."

The businesswomen have also worked out a scheme for sharing their income so that it benefits other women. From their earnings, 50 per cent will go to the female rig operators; 30 per cent into a basket-weaving fund for women in the area; and 20 per cent will be given to the Zubo Basilizwi Trust to expand the revolving fund for women in other areas. And while many challenges still remain, the women are starting to believe and accept that they are champions of their own destinies.

“Although I grew up here I had never been to the harbour. I had no idea what it felt like to sail on the river," says rig operator, Violet Mwinde. “I sold fish for years but could not afford to eat the fish I sold. Now, our children come to visit during the holidays and have fish. My life has changed significantly. I am healthy, physically and in spirit."

Related News
19/08/2019
In Rwanda, weaving baskets and brighter futures
07/03/2019
The journey along the gender road in Cameroon
30/08/2017
Women entrepreneurs in Ethiopia lead the way from poverty to empowerment
21/03/2017
From where I stand: “I feel like my life is headed somewhere”
23/02/2017
From where I stand: “I became the first fisherwoman in my community”
END_OF_DOCUMENT_TOKEN_TO_BE_REPLACED