Read Ms. Bachelet's remarks at the meeting with Soulalyates women

On the last day of her trip to Morocco to commemorate International Women's Day, UN Women Executive Director Michelle Bachelet, met with rural women of the Soulalyates ethnic group, who have been striving for inheritance and property rights. Their work is a testament to the mobilization of women on the ground towards collective land rights and economic independence. On arrival Ms. Bachelet was received with much affection and enthusiasm, which was followed by an engaged dialogue on the work of the women in bringing change in the community. 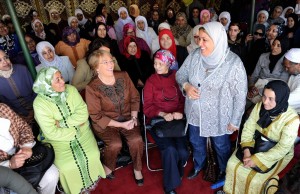 On the last day of her trip to Morocco to commemorate International Women’s Day, UN Women Executive Director Michelle Bachelet, met with rural women of the Soulalyates ethnic group, who have been striving for inheritance and property rights. Photo Credit: UN Women/Karim Selmaoui

Female members of the Soulalyate ethnic group in Kenitra province have been campaigning for their collective land rights since the land around them began to be privatized, threatening their homes and livelihoods. Supported by UN Women, trainings on economic empowerment and leadership skills, community engagement and public speaking, provided by the Democratic Association of Moroccan Women, allowed them to respond - and to change the course of the debate.The campaigns and press conferences held by Soulalyates women successfully mobilized public opinion, and led to a circular by the Ministry of Interior in 2010, which urged their provincial authorities to ensure that gender equality principles are observed in communal transfers. This has recognized women's rights to inherit communal land.

Meeting with the women, Ms. Bachelet heard about the community-based mobilization and the ways their actions have transformed their lives, and empowered them in their society. Soulalyate women have now successfully applied for compensation and earned money from the use of their land. Their efforts have also reverberated much farther: a second circular has been issued by the Ministry of Interior to promote the use of gender equality principles by local authorities in such transfers throughout Morocco.