Gender training for peacekeepers in Argentina

“Women hold the key to doors that are closed to men." So says Victor Nuñez, Commodore in Argentina's Air Force, who has seen his female colleagues use such keys for the benefit of many communities while on peace missions.

For instance, during such operations, women have access to testimonies from survivors of domestic and sexual violence, who might be reluctant to discuss their case with a man. During humanitarian operations in orphanages and schools, women can often connect more quickly and deeply with children; whether by virtue of their own skills, or the impressions of youth in that country. 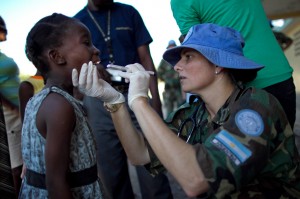 Argentinean Peacekeepers serving with the United Nations Stabilization Mission in Haiti (MINUSTAH) provide medical assistance at an orphanage as part of their work in the city of Gonaives on 3 November 2011. Photo credit : Victoria Hazou UN/MINUSTAH

During the recent visit of UN Women Executive Director Michelle Bachelet to Argentina, she attended the international conference on “Promoting gender for peace: reflections on the Latin American experience. There, Ms. Bachelet noted that the presence of women in civil protection teams in countries in conflict “helps to improve the interaction with community members, and better learn about their needs and their perception of threats to security in the territory.

Argentina is a leader on gender, peace and security in the region. It has a Directorate of Gender Policies in the Ministry of Defense and a ‘gender desk' in CAECOPAZ, the Argentine Center of Training for Peace Operations. On 24 April 2012, CAECOPAZ hosted a workshop on gender violence in peacekeeping operations, organized by UN Women in collaboration with the governments of Argentina and Uruguay.

The workshop aimed to train soldiers of both armies on legislation and good practices in preventing and responding to sexual violence, through case studies based on United Nations missions in Haiti and Democratic Republic of Congo.

According to Retired General Patrick Cammaert, responsible for facilitating the course, commanders have the unequivocal responsibility to implement UN guidelines, directives, and policies with regards to gender issues. These include Security Council resolutions such as 1325 on women and peace and security, and DPKO's guidelines on Integrating a Gender Perspective into the Work of the United Nations Military in Peacekeeping Operations.

The General works with UN Women to train peacekeepers around the world, and is a vocal supporter of women's participation in peace processes. “Gender mainstreaming in peace operations has very practical and operational implications, he said. “Gender issues should be taken into account in everything the UN does to prepare for tactical operations or field deployments, ranging from patrol composition, to information and intelligence gathering to special measures in the construction of camps to accommodate women's needs.

Latin America has increased its participation tenfold in the last decade. Brazil, Uruguay and Argentina lead the region in terms of troop numbers, while Uruguay ranks top worldwide in the ratio of troops deployed, to its population size.

At present, the percentage of women in the military component of peacekeeping missions worldwide is under three per cent.