No Woman’s Land: a new book recalls the frontline experiences of female reporters

So says award-winning Egyptian journalist, Shahira Amin, in a new book on frontline reporting by female correspondents, supported by UN Women. “No Woman's Land, released this spring by the International News Safety Initiative, compiled by Hannah Storm and Helena Williams, features the voices of over 30 reporters as they recall episodes of harrowing assault and inspirational bravery in contexts from conflict to civil unrest.

The reflections were collected shortly after the violent sexual assault of CBS correspondent Lara Logan by a crowd of men as she reported from Cairo's Tahrir Square in February 2011. Logan, who wrote the foreward to the book, has been credited for voicing concerns that many female reporters have formerly suppressed, out of fear for their professional freedoms and reputations. It signifies a new chapter of debate on the safety of women journalists in the changing landscape of media security. 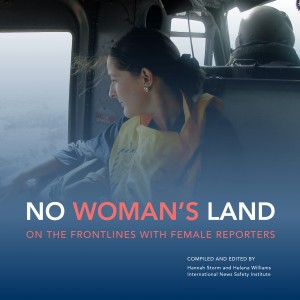 The collection features correspondents' experiences of sexual threat and hostile crowds; of dealing with protectionism from male editors, yet also the awareness of their differing vulnerabilities in global hotspots. Many are matter-of-fact about the challenges. “I felt vulnerable, said freelance journalist Agnes Rajacic, who was also molested by male activists while covering the Arab Spring in Egypt. But, she adds, “I saw it as an unavoidable evil that one could face in any crowded European football stadium.

Other female journalists have been frustrated by the overt and gender-specific focus on the threat of rape. Tina Susman, former bureau chief for the Los Angeles Times in Baghdad, writes that rape has long been the least of her worries, including during her three-week long captivity in Somalia. “Perhaps because rape is not a job-specific threat like bombs and missiles (and giant bugs), it doesn't occupy my mind on assignments the way those other threats do, she writes. “Like our male colleagues, our main concerns are staying alive and keeping our brains and limbs intact.

The common sense and security training most often used by female correspondents on assignment is directed at neither gender. However cultural norms, which restrict women's mobility in many countries, can both help and hinder their work. As many note, in very conservative contexts they may be shrouded and reliant on male colleagues, but here too they often gain access to women-only environments, and therefore a broader range of stories and perspectives.

Being underestimated at work - a major frustration - has also been used to many a female reporter's advantage. Journalist Nisha Roshita recalls being assigned to conduct tough high profile interviews in Indonesia specifically, she says, because of her gender. “And as a woman, it was easier to talk to local people without them becoming suspicious, she adds.

Yet what emerges most strongly from these recollections is the diversity of experience among women reporters, and the need for a strategy that empowers their work instead of restricting it.

“Rather than questioning the wisdom of sending women into potential perilous duty or worrying for their safety, editors and news organisations should focus on preparing women (and men) for the threat of sexual violence and helping them avoid it. says Susman. “I've rarely heard anyone say of men:‘They're too macho and always run toward the action, so maybe we shouldn't send guys into war zones.'“