Remarks by Lakshmi Puri Deputy Executive Director of UN Women at the Women's Federation for World Peace Fifth Forum on the Eradication of Poverty, 3 July 2012.

Good morning to all of you. It is a pleasure to participate in this side-event on the occasion of the ECOSOC Annual Ministerial Review. The focus of this event is very important to UN Women and critical to gender equality and women's empowerment. Indeed, promoting productive capacity, employment and decent work is central to poverty eradication. It is also critical to positioning women as both enablers and beneficiaries of social and economic development. And, of course, both are key to achieving the Millennium Development Goals. 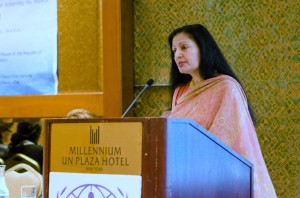 It is widely recognized that progress on MDG 3, to promote gender equality and empower women, is a cornerstone for the achievement of MDG 1 on eradicating poverty and hunger, as well as other goals.

While the Millennium Development Goals somewhat address the three dimensions of poverty eradication, the promotion of gender equality, and decent work and productive capacity, some gaps exist in the MDG framework to fully take advantage of linkages between these dimensions.

For example, MDG 3, to promote gender equality and empower women, is not comprehensive enough. Its target only refers to gender disparity in education, when we know that gender equality cuts across many more areas. Similarly, MDG 1 lacks engendered targets on poverty and hunger eradication.

I just returned from the Rio+20 Conference and I am pleased to report that the Outcome document seeks to address some of these gaps. Not only does it highlight the integration of economic, social and environmental dimensions of sustainable development, it clearly links sustainable development to poverty eradication.

The future women want is now integrated into the future everyone wants. The world recognizes that women's agency and leadership are inalienable for the realization of that future, which should be based on economic growth, social inclusion, environmental conservation and sustainability.

The Future We Want includes a strong call to increase the number of women in leadership positions. The document calls for removing any barriers that prevent women's full and equal participation in decision-making and management at all levels and in the economy. It calls on States to make and honor their commitments to equal rights and opportunities for women in political and economic decision-making and in resource allocation. 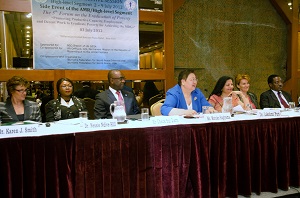 As the Secretary-General has highlighted, the emphasis on women's vital role in and for sustainable development is a major achievement of Rio+20. It is included in several thematic sections of the Outcome document, including on food, nutrition and sustainable agriculture, water, energy, health and population, sustainable cities, and education. It is also included in the sections on poverty eradication and, of course, in the section on employment, decent work and social protection.

This section highlights the importance of job creation through an enabling environment, forward-looking macroeconomic policies, productive employment opportunities, agricultural and industrial development and the provision of adequate services, including social protection. It also recognizes the importance of job creation and capacity-building for women, especially young women.

It is essential that macroeconomic policies be gender responsive and that the policy and institutional environment takes into account specific challenges faced by women. It must include laws and policies to promote women's access to productive assets and economic resources, including equal land and property rights, credit, inheritance, natural resources and technology. This has been underlined in several international agreements, including the Beijing Platform for Action. It has also been reaffirmed in Rio and it is central to building women's productive capacity.

In this sense, I applaud the G20 declaration recently issued in Mexico. The G20 committed to taking “concrete actions to overcome the barriers hindering women's full economic and social participation and to expand economic opportunities for women in G20 economies. This is a major step forward in acknowledging the nexus between women's empowerment, promoting productive capacity, employment and decent work and poverty eradication.

The G20 also made a firm commitment to advancing gender equality in all areas, including skills training, wages and salaries, treatment in the workplace, and responsibilities in care-giving. This captures four important policy responses that are needed in order to enhance productive capacities.

This last point on shared responsibilities in care-giving is especially important, as employment policies, which are underpinned by stereotypes of women as “homemakers and men as “breadwinners, differentiate how women and men access and benefit from employment. Even when recruitment of women is explicitly promoted, wider socio-economic and cultural discrimination may prevent women from accessing employment and advancing their careers.

The broader socio-economic context can also have adverse consequence for women's economic empowerment. Gender wage gaps reflect disadvantages in education; bargaining power and labor market mobility and flexibility; a high degree of involvement in part-time, temporary and low-income jobs; and direct discrimination. Studies of gender-wage differentials suggest that some of the difference between men and women's earnings is due to direct gender discrimination and notions of men being more productive and competent than women.

One critical area is the regulation of work and employment conditions of most vulnerable workers, typically those employed in the informal sector, including home-based workers, domestic workers and migrant workers. Institutional capacities need to be strengthened to formulate and implement policies enhancing women's access to employment and decent work.

Another important policy area is to develop and improve the use of sex-disaggregated data and gender statistics through more gender-sensitive data collection instruments, including time-use surveys.

It is also crucial to ensure adequate budgetary resources and investments in more jobs, decent work for women and women's economic empowerment and to promote accountability by monitoring implementation, and providing incentives for compliance and effective regulation

These policies must urgently be put in place, especially in the current context of growing inequalities within and between countries and rising unemployment. This situation has been exacerbated by the global economic and financial crises of which, in many ways, women bear the brunt. Today, women represent 60 percent of the world's poor and the continuing feminization of poverty is a worrying trend.

Promoting women's productive capacity and decent work is an important strategy to reverse this trend. More jobs, decent work and economic empowerment for women is not just good for women, it is good for the economy. For example, an ESCAP report found that the Asia Pacific region is losing 42 to 47 billion US dollars per year because of restrictions on women's access to employment opportunities.

I am hopeful that on the basis of Rio+20 and other guiding documents, we can increasingly achieve a model of inclusive growth where women are economically empowered to participate in and benefit from growth on ‘upward equalizing' terms with men. The promotion of productive capacity, employment and decent work is a key strategy in this regard. This is not only essential to sustainable economic growth and social justice; it is absolutely central to the realization of women's human rights.

Related News
13/03/2014
The Beijing Platform for Action and the Global Development Agenda from the MDGs to the Post-2015 Development Agenda – a speech by Lakshmi Puri
09/03/2014
Remarks by Lakshmi Puri at the NGO CSW Forum
24/02/2014
Opening remarks by Lakshmi Puri on the MDGs, post-2015 development agenda, gender equality and the empowerment of women and girls in the Arab region
18/02/2014
Member States and civil society organizations in Asia-Pacific endorse a stand-alone gender equality goal for post-2015
17/04/2015
Media advisory: New York launch of flagship UN Women Report: Progress of the World’s Women 2015-2016
END_OF_DOCUMENT_TOKEN_TO_BE_REPLACED