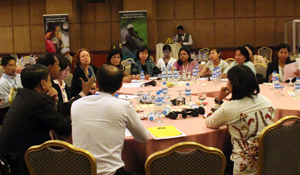 Delegates of the Regional Conference on Human Rights Instruments, International Labour Standards and Women Migrants' Rights in one of four interactive workshops, discussing how to better protect and empower women migrant workers in the pre-employment stage of migration. Photo: UN Women/Gihan Hassanein

More than 100 delegates met in Phnom Penh for a regional conference boosting protection and empowerment for Asia's vulnerable migrant workers this week.

The conference - co-organized by UN Women, the Cambodian government, and International Labour Organization (ILO)- coincided with the ratification by the Philippines of a UN treaty providing a set of international standards to improve the lives of millions of domestic workers, many of whom are migrant women workers. Over 40 per cent of countries in the world exclude domestic work from labour laws.

The Convention on Domestic Workers, which states that workers around the world who care for families and households must have the same basic labour rights as other employees, was adopted at the annual conference of the UN International Labour Organization last year in Geneva. The convention required two countries to ratify it, the first was Uruguay.

International migration, including the migration of an increasingly younger, mobile, and feminized workforce, is one of the growing trends of the 21st century. While migration's greatest benefits for women are new opportunities and independence, women migrant workers also face unique risks and challenges throughout the migration process. These include sex- and gender-based discrimination and violence, exploitation by recruiters and employers, and a systemic lack of access to justice.

“As policy makers, we have to take appropriate measures to protect migrant workers and manage recruitment agencies, from the registration of the agencies to recruitment, from pre-departure to sending, placement and return, said Cambodia's Minister of Labour and Vocational Training, Women represent over half of Asia's migrant workers and in some countries they overwhelmingly outnumber male migrant workers.

In Indonesia women make up 83 per cent of outgoing migrant workers, according to the International Organization for Migration (IOM) and the Migration Policy Institute. A July 2012 report by UN Women and the V. V. Giri National Labour Institute of India found that women represent over 68 per cent of Nepal's migrant workforce.

According to the World Bank, recorded remittances received by developing countries amounted to USD 372 billion in 2011, an increase of over 12 per cent from 2010, dwarfing official aid flows. Asia receives the lion's share of remittances, with India (USD 64 billion), China (USD 62 billion) and the Philippines (USD 23 billion) among the top five remittance receiving countries in 2011. These hard-earned savings, often from low-wage workers, are used for food, housing, education and healthcare.

“Providing protections for women migrant workers, and empowering them to access justice throughout the migration cycle, not only benefits women and their families, said Mr. Ramanathan Balakrishnan, Deputy Regional Director of UN Women's Asia Pacific Regional Office. “It also maximizes their contributions to the economies and societies of countries of origin and destination.

The Cambodia conference agreed to a set of concrete commitments to advance the protection and empowerment of women migrant workers through the The Phnom Penh Conclusions and Recommendation. The document includes provisions for review and implementation, and promotes gender-responsive, human-rights-oriented and people-centered labour, migration and trafficking laws and policies.