Paving a path towards equality, with greater voice to grass-roots women

Much attention has gone into increasing the number of women elected to office at the national level and numbers are slowly rising. Yet in local government, percentages of women remain dismally low, although statistics are hard to track. When they do participate, it is often the women who are connected to the political sphere or the elite that emerge victorious. 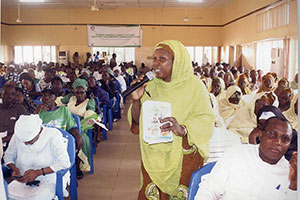 A cross section of grass-roots leaders in Nigeria at a programme on popular participation. Photo: Community Life Project

To give grass-roots women – largely without money, education or political connections through family or marriage – greater access and opportunities to enter politics or have a political say, two new Fund for Gender Equality [1] grantees in Georgia and Nigeria are implementing programmes to give these women a voice in governance.

“The potentially powerful voices of grass-roots women as a pressure group for women’s agendas are completely unharnessed in both local and national political processes,” says Alla Gamakharia, chairperson of the Cultural-Humanitarian Fund “Sukhumi” in Georgia. She believes that women’s local-level voice and agency in politics and governance is even more important than national-level engagement, because the local level is the frontline of public-service-delivery and the space where an immediate and direct impact on women’s lives is made.

Ngozi Iwere, Executive Director of the Community Life Project (CLP) in Nigeria agrees that access to these services sets the foundation for life-changing futures: access to water will free up girls’ time to allow more years of education, which will impact health and income potential. “Giving women a voice is therefore the first building block to attacking the big-picture issues of poverty, gender violence, and social vulnerability,” she says.

In Georgia, Fund Sukhumi will work with city councils to catalyze the creation of Gender Advisory Councils in three municipalities in western Georgia. The Fund will develop the capacity of members of the country’s first institutional structure for local women’s participation in developing and monitoring gender-responsive programmes, polices and budgets. They will pursue gender-responsive recommendations and legislation at both local and national government levels. 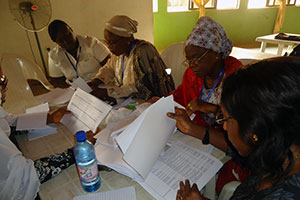 In Nigeria, CLP will harness vast networks of community-based organizations to pressure political parties to adopt affirmative action for women candidates. CLP will address women’s marginalization by directly increasing the number of women in politics through training grass-roots women leaders to participate in governance and team them up with women in political parties.

Both Fund Sukhumi and CLP’s programmes were among three initiatives awarded a Fund for Gender Equality grant in 2013 with support from the Government of Switzerland, which recently contributed USD 2.1 million, becoming the Fund’s sixth donor partner. The other programme, led by two NGOs, seeks to tackle “cultural” arguments to CEDAW in Singapore, Indonesia and Malaysia.

Around the world, the concept of 'culture' has often been invoked to disempower women and perpetuate gender inequality. Women’s organizations have been steadily working to end the strategy of distorting understandings and meanings of culture to legitimize the oppression of women, explains Sahar Pirzada, project coordinator of the Association of Women for Action and Research (AWARE) of Singapore. “Gender equality is our culture,” she says, a sentiment echoed by many women’s organizations in the region. 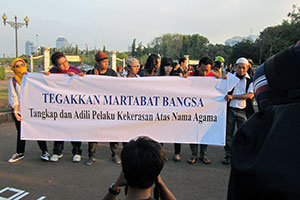 AWARE and Indonesia’s Solidaritas Perempuan are two new grantees leading the programme Enabling CEDAW through Gender-Equitable Interpretations and Expressions of Culture in Singapore, Indonesia and Beyond. With a wide network of regional organizations, the programme seeks to stop arguments based on so-called ‘culture’ from blocking the full adoption and implementation of the Convention on the Elimination on All Forms of Discrimination against Women (CEDAW), popularly referred to as the international bill of rights for women.

So far, 187 countries have ratified CEDAW, which means they have committed to implement its provisions – including the principle of gender equality – into their legal system, abolishing all discriminatory laws and adopting appropriate ones prohibiting discrimination against women. Yet, in spite of the near-universal adoption of this international treaty, a number of countries place broad reservations to CEDAW articles, often on the grounds that they contradict the country’s culture (or religion). Many States have placed reservations on all, or parts, of Article 16, which requires countries to ensure that women have equal rights with men in matters related to marriage and family. 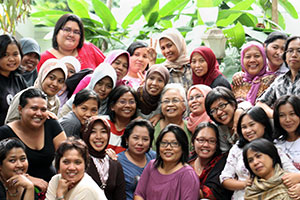 The FGE supported-programme will support advocacy campaigns for the withdrawal of reservations and full CEDAW implementation by creating a shift in dialogue from culture as an obstacle to women’s rights, to emphasizing instead how culture can be an instrument to demand rights and assert gender equality. The initiative is among a number of the Fund’s programmes around the world that seek to address the abuse of culture to legitimize oppression.

[1] UN Women’s Fund for Gender Equality is a multi-donor initiative dedicated to the advancement of women’s economic empowerment and political participation that awards multi-year grants directly to women’s organizations, governmental and non-governmental organizations whose programmes demonstrate tangible results impacting the lives of women and girls.

Related News
06/02/2019
From where I stand: “Disability will not stop me from achieving my dreams.”
09/04/2018
In the words of Blessing Ihauku Daru: “Women need to be in the corridors of power and politics”
03/10/2016
Strong steps forward for the African continent as Nigeria and Liberia undertake new legislation
10/03/2021
Press release: Women in politics: New data shows growth but also setbacks
01/03/2021
Claiming women’s space in leadership
END_OF_DOCUMENT_TOKEN_TO_BE_REPLACED