As Nepal goes to the polls, a push to increase women’s representation

With few female candidates and poorly financed campaigns, observers wait and watch to see if quotas will be enough to maintain the 33 per cent of women’s representation achieved in Nepal’s previous Constituent Assembly.

After a year and a half of political impasse and repeated delays, on 19 November, Nepal goes to the polls to elect new representatives to draft a constitution. The long-awaited elections are a landmark for Nepal’s democracy.

The former Hindu kingdom emerged from 10 years of armed conflict in 2006 and established itself as a Federal Democratic Republic. However writing a constitution has proved challenging and the first Constituent Assembly, elected in 2008, was disbanded after four years when it became clear that it would not succeed in doing so. 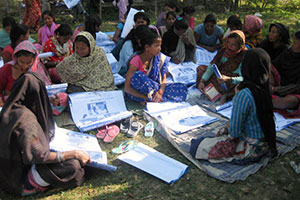 Women voters from Kailali district in far-west Nepal participating in an orientation session for the 2013 Constituent Assembly election on 11 November 2013. Photo: Pro-Public

The fresh round of elections comes with renewed hope and optimism for Nepal’s democracy. Through his spokesperson, United Nations Secretary-General Ban Ki-moon applauded the commitment and professionalism shown in the election preparation process and said: “Much of the election campaign has been conducted in a spirit of free and open competition, and with a commitment to the peaceful democratic future of Nepal.”

But amid optimism about this milestone, there are concerns whether the percentage of women representatives can be increased, or even maintained.

However, issues around women’s participation have resurfaced regularly in the months leading up to the election. Despite the fact that women now represent 50 per cent of all registered voters, under the First-Past-the-Post (FPTP) race, whereby 240 of the 601 members are elected, only around 10.8 per cent of candidates are women. Moreover, the major political parties have reduced the number of female candidates as compared to the previous elections. Additionally, female candidates struggled to finance their campaigns and some of them have been nominated for constituencies where their chances of winning are considered nil.

The low number of nominees under FPTP will be partly balanced out by the 50 per cent candidate quota for women under the Proportional Representation system (under which 335 of the 601 members are elected). However, women had hoped for a stronger commitment to gender equality under FPTP.

UN Women in Nepal, in partnership with UNDP and its Electoral Support Project, have worked to strengthen women’s part in the election process by educating women, especially those from marginalized communities, about voting and their role in the elections. In the lead up to the elections, partnerships were formed with media and civil society groups to increase awareness across the country of the importance of women’s participation in the elections and beyond, reaching at least 6,000 women directly.

“Women’s lives are as much affected by government decisions as are those of men. It is therefore important that they are equally engaged in making these decisions,” says Ziad Sheikh, Representative of UN Women Nepal. “Excluding women from the political process not only violates their rights, but also leads to a loss of richness in perspectives and experiences brought to the table. The situation in Nepal and other countries across the world shows that ongoing efforts are required to overcome persistent barriers of gender discrimination.”

“For the young democracy, it is crucial that sufficient numbers of women vote, become elected and participate equally with men – even more so now that there are hopes that a constitution can be drafted and finalized within the coming year,” said Mr. Sheikh.