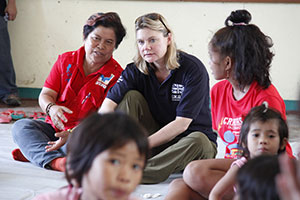 On 25 November, the Government of the United Kingdom announced additional end-of-year core funding of GBP 7.5 million (USD 11.9 million) for UN Women. This adds to its contribution so far in 2013 of USD 7.6 million – bringing the country’s overall 2013 contribution to approximately USD 19.5 million and making it the top donor to the organization’s core budget. In an interview, UK Secretary of State for International Development Justine Greening explains why her Government believes funding UN Women is such an important priority.

There are some shocking statistics when it comes to the way girls and women are treated across the globe. For example, one in three women is beaten or sexually abused in her lifetime; one-third of girls in the developing world marry before the age of 18; women perform two-thirds of the world’s work, produce half of the food, but earn only 10 per cent of the income and own only 1 per cent of the property; and although women make up more than half the population, they represent only 20 per cent of political leaders in the world.

Investing in girls and women is critical to reducing poverty and building prosperous, free and fair societies. That is why I have been working hard to put girls and women at the heart of my Government’s international development policy. By doing so, we can help to stop poverty before it starts.

We know that getting girls into school begins a chain reaction of development benefits. Educated women have better maternal health, fewer and healthier children and increased economic opportunities. They are also more likely to send their own children to school.

More generally, I believe that countries where half of the population is prevented from pursuing productive opportunities will miss out on their full development potential. And we know that when a woman generates her own income she reinvests 90 per cent of it in her family and community.

We also know that conflict and humanitarian disasters can have a disproportionate impact on women who are at greater danger of rape, violence and trafficking. This is not right, which is why DFID announced an additional £21.6 million of funding in November to help protect women in emergencies.

Gender equality is a fundamental aspect of DFID’s multilateral aid policy. Every few years we carry out a Multilateral Aid Review (MAR) to make sure the organizations which the UK funds are achieving value for money for the UK taxpayer. Performance is assessed against delivery on core criteria reflecting DFID’s priorities, including gender equality.

Unfortunately, performance on gender equality is still one of the weakest and most unsatisfactory areas in the MAR. We have an awful long way to go before the multilaterals are delivering across the board on gender equality and we will keep pushing them until they do.

Why is UN Women the best fit for channelling your development assistance?

UN Women has brought greater coordination and support to the UN and Member States on gender issues so that there is a more coherent and collective global drive for gender equality and female empowerment.

We are committed to working with UN Women to address the outstanding development challenges facing girls and women around the world. Our recent £2 million increase in funding to UN Women is an indication of how important we believe UN Women is to delivering this agenda.

We want this funding to help improve the impact of the UN’s collective gender response and to further UN Women in its work with partner countries to tackle gender issues. I also would like to see UN Women play a leading role in advocating a stand-alone gender goal in the post-2015 development framework.