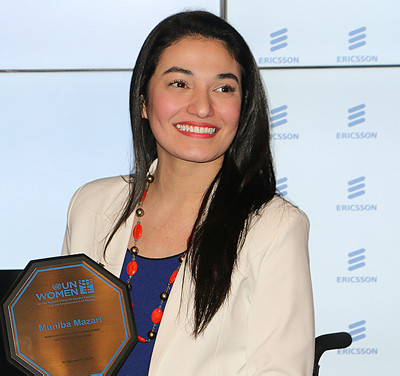 Islamabad, Pakistan - UN Women appointed artist-writer-singer-activist Muniba Mazari as its first National Ambassador to advance gender equality and the empowerment of women and girls. The announcement was made in Islamabad, Pakistan during an event to mark the end of ‘16 Days of Activism against Gender-Based Violence’.

In her new role, Mazari will advocate for the UN Women’s initiative Step It Up for Gender Equality and other campaigns promoting women’s empowerment.

Read the full story on UN Women’s regional website for Asia and the Pacific: http://asiapacific.unwomen.org/en/news-and-events/stories/2015/12/un-women-pakistan-appoints-muniba-mazari-as-first-national-goodwill-ambassador