People from all over the world have become advocates for women’s economic empowerment, participating in Empower Women’s Global Champions Programme.

A single mom of two at the peak of her career, Sharon Reed suddenly found herself unemployed through a series of unexpected circumstances. One evening, after again being passed up for a position for being ‘overqualified,’ her young daughter tearfully suggested that perhaps if she was “less smart” and knew less than potential employers thought she did, it might be easier for her to get a job.

“I realized in that moment that it was no longer about my personal struggle. It was not even about my daughter. It was about every woman and girl who had struggled to come into her own voice only to then be told to dumb down and stay small,” said Sharon, 47, from the United States of America. This was the moment that women’s empowerment became her calling. 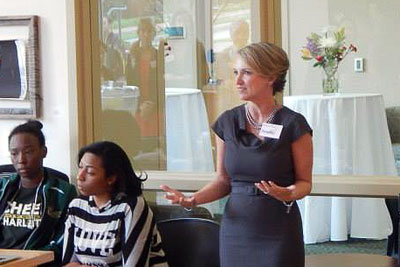 Today, Sharon participates as an active Global Champion on UN Women’s Empower Women web portal for women’s economic empowerment. On the platform, women and men from all over the world connect and share their personal and professional stories, access the latest resources on women’s economic empowerment, and participate in learning and professional opportunities.

New Empower Women Global Champions are selected every six months. After submitting an application online, candidates are invited to participate in a month-long “championship rally”. The Empower Women team assesses how dynamic, creative and passionate participants are in leading the clarion call for women’s economic empowerment. Once selected, champions work for five more months to explore innovative and creative tools and solutions.

As an Empower Women Global Champion, Sharon became one of the conceptualizers of the ongoing I am (wo)man campaign, which features both women’s and men’s individual stories and how they have experienced and benefited from women’s economic empowerment. 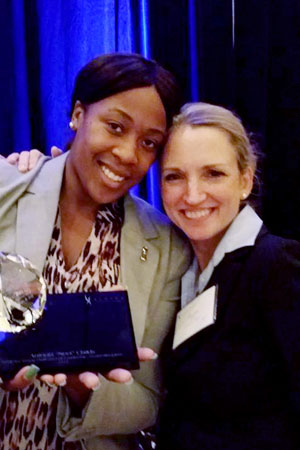 She also encouraged a woman in her community, Antonia (“Neet”) Childs, to publish a blog on the Empower Women website, highlighting the story of how Neet escaped a sex-trafficking ring in Charlotte, North Carolina and is now helping other young women and girls transition out of ‘the life’ through social entrepreneurship. A testimony to her inspiring story, Neet was recently invited to the White House by her local Congressman and continues to share her story with others.

“Empower Women has given me a credible platform to engage and connect with others in the field that I might otherwise not have been able to reach,” Sharon said. Among the speaking opportunities presented to Sharon during her championship were a Time Warner Cable webinar and the board meeting of the UN Women National Committee.

Fasiha Farrukh, who also participated in the programme, said she learned how to be an advocate for women’s empowerment as well. In her community in Pakistan, she said gender-based discrimination is common. While growing up she was often told that it was not good for women to work or get degrees because it would make things too difficult for them in that society, as they are expected to stay in the home.

“This was something that was unacceptable for me,” Fasiha said. Since becoming an Empower Women Champion, she has learned how to share ideas with other advocates around the world and how to bring good practices on women’s economic empowerment from other communities back to her own. She recently published a blog about the gender pay gap in Pakistan.

She has located many inspirational women in her region and have featured their stories on the Empower Women platform to share with other Women in her community and around the world.

While people come to the platform from many different levels of experience, backgrounds and walks of life, they leave with a sense of having been a part of something much bigger than themselves.

“I was able to interact with all the other champions from across the world,” said Kavelle Christie, originally from Jamaica and now working as a political operative in Pennsylvania. “[Participating as an Empower Women champion] was a really great opportunity to finally be able to become engaged in one of the issues that I am really passionate,” she said.

In the first class of the Global Champions Programme, Kavelle organized and participated in Tweet-a-thons promoting Empower Women, discussed women’s economic empowerment, uploaded resources to the platform, held online discussions and webinars, and spoke to various leaders in different countries on the issue.

“Empower Women is a grass-roots movement that engages gender equality advocates from all over the world,” said Meg Jones, Chief of Economic Empowerment, UN Women. “In today’s fast-paced culture, it is impossible to advocate for women’s economic empowerment solely through offline activities. Empower Women provides the perfect balance between online and offline engagement. In just five months, Champions can see the impact of their work for women’s economic empowerment, and how much they have grown both personally and professionally.”

Empower Women is currently accepting applications for the next cohort of Global Champions. The deadline for submission of interest is 1 October 2015. For more information visit Empower Women.