“Commitments must not be simply plans on paper”—Executive Director 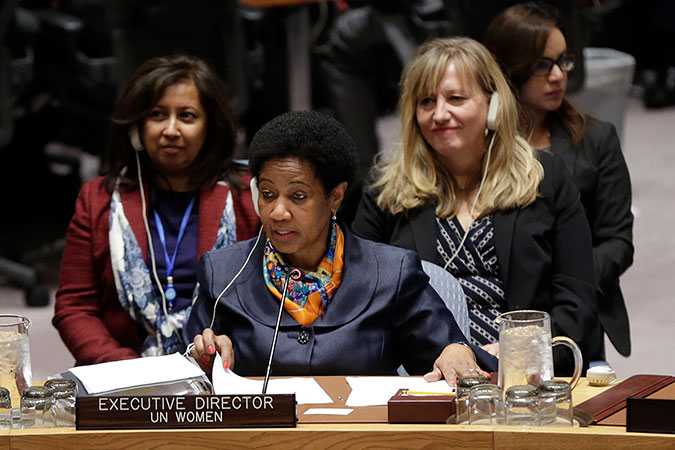 It is an honour to address the Security Council and to present the Secretary-General’s report on Women, Peace and Security on his behalf.

I thank the presidency of Russia for chairing this debate today, and for proposing to review implementation of the commitments made last year by Member States, regional organizations and the United Nations.

Last year’s Open Debate had the highest number of participating speakers in the entire history of the Security Council.

More than 180 political, financial and institutional commitments were made in the course of the high-level review of 1325, and a new resolution of the Security Council was passed, resolution 2242.

These commitments are important and they can make a difference. They must not be simply plans on paper. We must turn them into actions.

Last year's global study on women, peace and security was welcomed as a guide that can keep us moving forward with our work.

Today we can call on Member States, regional organizations, and the UN to do more to take forward the recommendations of the Study and to turn your own commitments into concrete action.

This Council is well positioned to ensure greater accountability to each other. Every year, and the time is now, you can match words with action.

UN Women is already responding to many of the findings and recommendations of the global study and the call of resolution 2242.

We are serving as the Secretariat of key new mechanisms, such as the Council’s new Informal Experts Group and the Global Acceleration Instrument.

We are pleased to announce that we will also perform the secretariat function to support the new network of national focal points.

We will respond to last year’s call for greater visibility and leadership in this area.

We will mobilize high-level champions who can amplify our voice, our message, and our presence, and ensure that the women, peace and security agenda has the broadest possible support.

We are collaborating closely with the Peacebuilding Support Office and other partners to ensure that gender is fully reflected in the Sustaining Peace and youth, peace and security agendas.

I congratulate the Peacebuilding Commission on adoption of its Gender Strategy, a first among our intergovernmental bodies.

We are also working hard to ensure that the UN’s approach to prevent and counter violent extremism engages women’s leadership and respects and promotes women’s rights.

Even though there is much more to do, this year’s annual report has several markers of progress.

We have several gender justice milestones in both national and international courts in the last few months.

But the report also notes many areas of concern and stagnation.

This Security Council is very aware of the atrocities committed against women and girls in war-ravaged countries.

We still count the days since the Chibok girls, were abducted. We remain concerned about the many who have not been found in Nigeria and elsewhere.  And we welcome the release of 21 Chibok girls.

We will continue to count the days until all are released.

There have been extensive reports of the abuses committed against Iraqi and Syrian women and girls trapped between ISIS and the military operations against them, including the current situation in Mosul.

South Sudanese women and girls are raped by armed actors with total impunity.

In addition to these examples of extreme violence against women, we have countless examples of extreme political marginalization of women in public life and decision-making. These must also be of concern to this Council with its considerable powers.

In the first year of the Informal Experts Group on Women, Peace and Security, members of the Security Council discussed four country situations: Mali, Iraq, Central African Republic, and Afghanistan.

In many of these contexts, the UN shows a similar lack of representation of women.

In the UN special political mission in Afghanistan, women are only 13 per cent of the overall staff, and 11 per cent of leadership positions.

These stark deficits in our own gender balance cannot continue.

We pay a daily price for it in our reputation and our effectiveness.

The incoming Secretary-General’s commitments to take concrete measures to achieve gender parity within the UN is a welcome breakthrough.

Finally, I want to end by recognizing our current Secretary-General’s contribution to women, peace and security.

The UN system has made important progress on this agenda under your leadership. We know that these issues are close to your heart and that you will continue to champion them in any future role or capacity.

UN Women thanks you for your commitment to women, peace and security.

And thank you, Mr. President, for the invitation to brief the Council today.

Photos from the Open Debate and events on women, peace and security