Finding inspiration amid devastation in Fiji 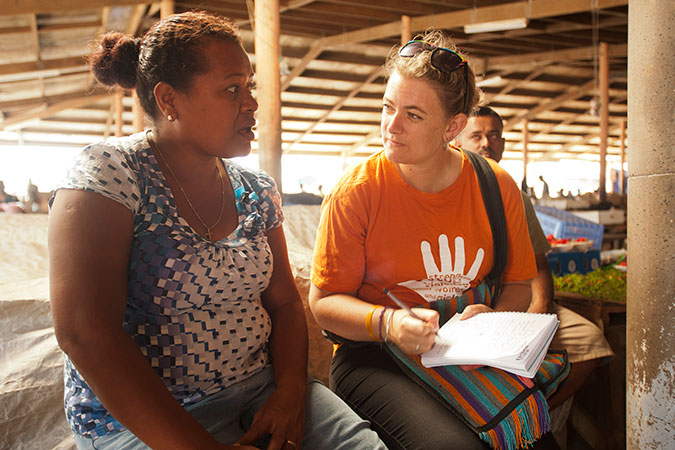 Lusiana Bulu, 38, talks to UN Women's Ellie van Baaren about the challenges she and other market vendors are facing in the wake of Tropical Cyclone Winston.Photo: UN Women/Murray Lloyd
Ellie van Baaren, is the regional communications and media specialist for UN Women’s Fiji Multi-Country Office. She worked as a journalist and communications consultant for 15 years before joining UN Women as a VSA volunteer from New Zealand in March 2014.

The first thing that hits you about a country that has felt the full force of a category five cyclone is the trees. It’s like they have been ravaged by a forest fire, one that strips them of their foliage but otherwise leaves no visible scorch marks. Unfortunately, I was seeing this for the second time in less than a year. Surveying the damage, talking to women who are battered and exhausted—but far from broken by Mother Nature’s fury—I have witnessed women’s incredible strength and resilience.

As the communications and media specialist for UN Women’s Fiji Multi-Country Office, it’s my job to help amplify the stories of the challenges Pacific women experience in their everyday lives, as well as their achievements and what we are doing as an organization to help create change. It’s a privilege and a responsibility. It can leave me feeling at times enraged and indignant but also hopeful and inspired. 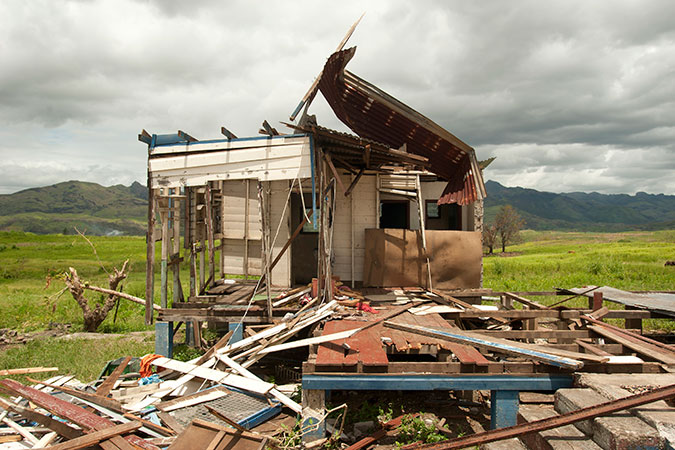 An example of the destruction wrought by Tropical Cyclone Winston along the Kings Road on Viti Levu, Fiji.Photo: UN Women/Murray Lloyd

Cyclone Pam was a monster storm that made a direct hit on the south-eastern islands of Vanuatu in March 2015. The death toll was mercifully small but the level of destruction was devastating. Up to 98 per cent of crops were destroyed, depriving thousands of both their sources of food and income. Some of the hardest hit were the women, who are often tasked with growing and selling the produce at rural or urban markets. The money they earned paid for their children to go to school, the clothes on their backs and the food on their tables. I spent five days travelling around Efate island talking to women about what they had experienced and what the future held.

Just 11 months later, Cyclone Winston turned from a nuisance storm into a terrifying Category Five monster. The strongest cyclone ever to hit Fiji and one of the strongest to hit the Southern Hemisphere, its wind gusts reached 350kmph and storm surges inundated coastal towns. 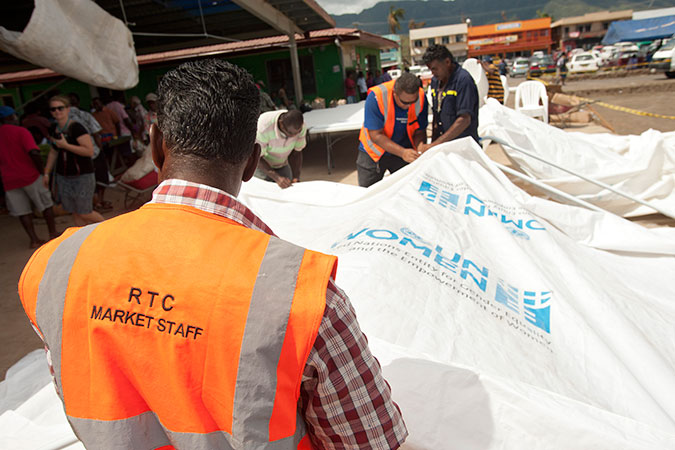 Putting up the tents, tables and chairs provided by UN Women to serve as a temporary market space in Rakiraki. Tropical Cyclone Winston destroyed the market building, depriving hundreds of vendors, most of them women, of a place not only to earn a living, but also to support each other emotionally as they recover. The tents, tables and chairs were provided through UN Women's Markets for Change project, which is funded by the Australian Government. Photo: UN Women/Murray Lloyd

For me it hit much closer to home—literally and figuratively. Firstly, I got a taste of what it feels like to experience such a storm. A weekend holiday put me in Winston’s path, less than 50km from the storm’s centre, and I’ll never forget the hours I spent huddled in the toilet while the wind roared and trees cracked and fell around me. But I was lucky. Many of the women I had talked to over the past two years had lost everything. They would have to start again, some with even less than the first time.

UN Women does a lot of work with market vendors and farmers, and with partner organizations working to end violence against women and girls. Here in the Pacific, we also focus on ensuring the needs and capabilities of women are integrated into every level of disaster response, recovery and risk reduction. It’s essential in situations like Pam and Winston that the voices of women are heard and that they receive the support they need to get back on their feet as quickly as possible.

That’s where I get to play a part. My role is to listen. To document and share the stories, experiences and messages of the women most affected by disasters like Cyclone Pam and Winston. In early March 2016, that role brought me to Rakiraki and Varanisese Maisamoa. I met the 38-year-old Varanisese among the ruins of Rakiraki Market, selling vegetables she had travelled almost 190 km to find because her normal suppliers now have nothing to offer. 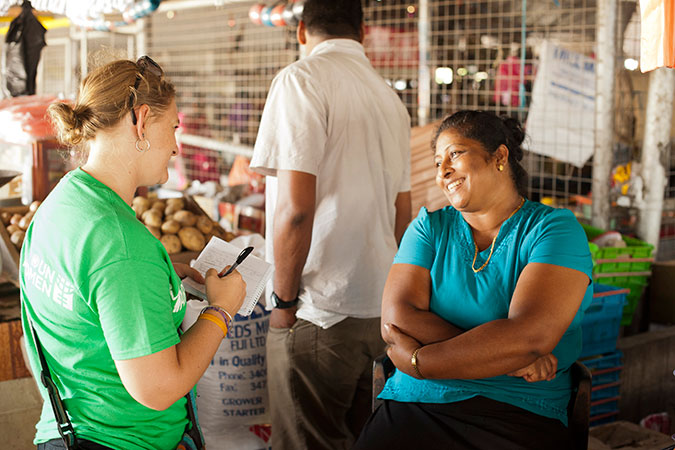 UN Women's Ellie van Baaren talks to Reenal Prasad about the challenges she has been facing since Tropical Cyclone Winston hit Fiji. While her house in Toko, about 3 km from Tavua, survived, most of her family's belongings were ruined by the rain and flooding.Photo: UN Women/Murray Lloyd

She’s my age [38], but her life couldn’t be more different. She’s been selling at the market for 11 years and is the President of the Women Vendors Club. In ordinary times, on a good day, she can make FJD 100-150 (USD 50-75), which covers the water bill, transport, her children’s school and medical care, and any day-to-day needs.

She, her husband and her four daughters all sheltered in their outhouse while Winston took the roof off their home. At his boarding school in Suva, her son had to run for his life. Varanisese then spent two days sleeping in her car to ward off looters. Ten days after the cyclone she had no electricity and intermittent water supply. 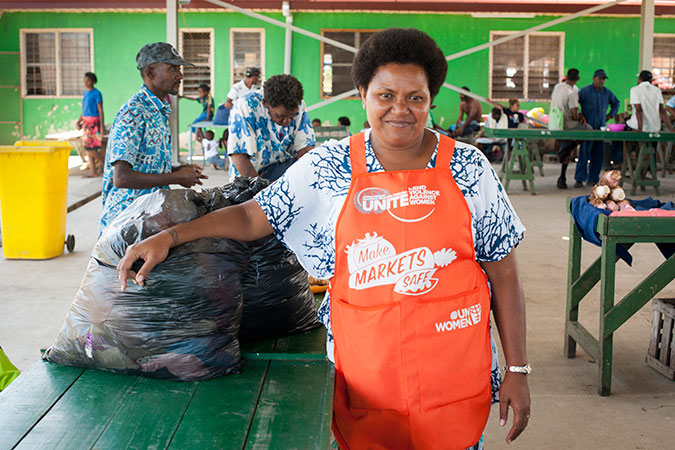 Varanisese Maisamoa, 38, pulled together half of what she had left after the cyclone to donate to her fellow market vendors.Photo: UN Women/Murray Lloyd

Yet, despite her own losses, her mind is on her fellow market vendors and the rest of her community. She is working to organize a group of women vendors to collectively pay enough for a farmer to deliver a truckload of produce for them to sell; she has also gathered half of what she has left to give to other families who need it.

To hear her speak with such hope and solidarity despite having lost so much is deeply inspiring: “I love this community. Everyone is your friend; everyone is your neighbour. Right now we have to be brave and put a smile on our faces and try to move on,” she says.

And that’s what stays with me long after I thank these women and head back to my comfy office. The sheer resilience in these women and their communities is astonishing, but ultimately unsurprising. I see it and hear it every time I interview a woman taking part in one of our programmes, every time I observe one of our partner organizations in action. It just shines a little brighter when they’re faced with such dark times. 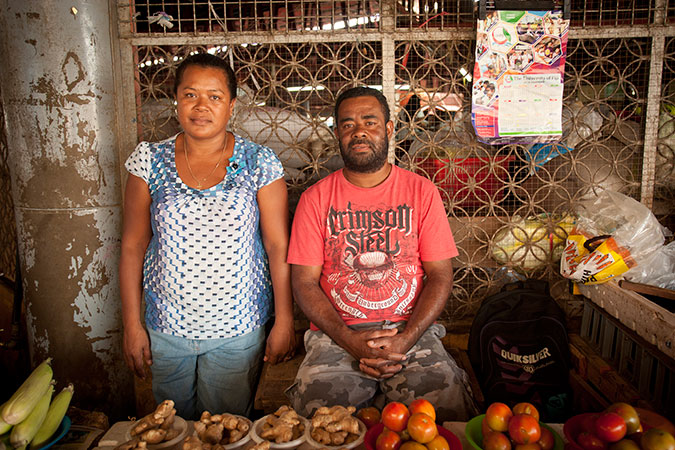 Lusiana Bulu, 38, and her husband Lukekalevu at Ba Market in Fiji's Western Division. The cyclone was already approaching Ba when she left the market to secure her home and by that time it was too late to head to an evacuation centre. They lost their toilet and bathroom and still have no electricity. The market is their only source of income, but many customers cannot afford the higher prices caused by a shortage of local produce after Tropical Cyclone Winston.Photo: UN Women/Murray Lloyd 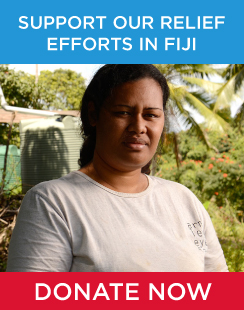 Read more stories in the “A day in the life of...” editorial series.

Related News
Preparing for disasters, rebuilding in the aftermath
Placing Pacific women at the forefront of disaster planning and response
A snapshot of our work in response to the cyclone in Fiji
Expert’s take: Getting the post-cyclone response right for women in Fiji
Psycho-social assessments help address needs of women and girls in Fiji
END_OF_DOCUMENT_TOKEN_TO_BE_REPLACED