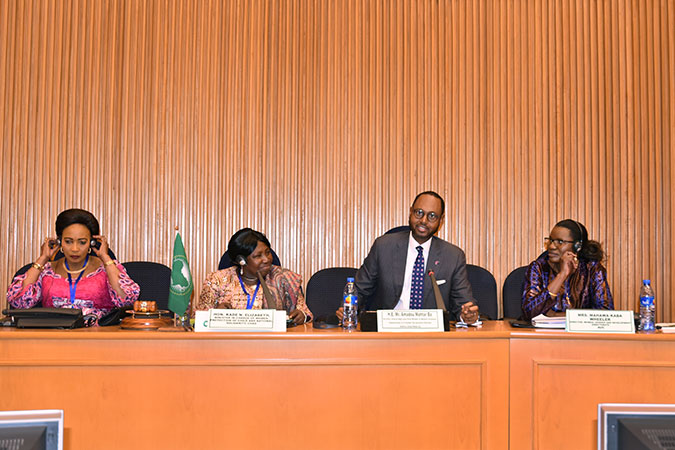 Mr. Amadou Mahtar Ba, Founder and Executive Chairman of AllAfrica Global Media and HLP member during his presentation at the AU Summit. To his right, Mrs. Mahawa Kaba Wheeler, Director, Gender and Development Directorate of the African Union Commission, and to his left, Ms. Madam Kade N. Elizabeth, Minister in Charge of Women, Protection of Child and National Solidarity of Chad. Photo: UN Women/Helen Yosef

On 29 June, Mr. Ba made a presentation on the linkages between the recommendations and the drivers of the HLP, following the final report presented in March 2017 to the UN Secretary-General, and the Pillar 1 of the AU Roadmap on Harnessing the Demographic Dividend through Investments in Youth, which focuses on Entrepreneurship and Employment.

The presentation, which took place at the African Union premises and in the presence of ministers from Ethiopia, Mauritius, Rwanda, and Sierra Leone, among others, highlighted the importance of addressing the gender-specific challenges to African youth’s employment and entrepreneurship. With 60 per cent of Africa’s population currently 24 years old and below, youth represents one of Africa’s greatest asset. However, African youth account for more than 60 percent of all unemployed people in Africa and the rates are worse for young women who face specific, structural and cultural barriers. At the presentation, Mr. Ba stressed that empowering young girls is an urgent requirement to leverage the full potential of Africa’s large youth population, which holds the promise of social and economic transformation.

Targeted action is needed to ensure young women’s access to the labour-market and to financial assets and services. Action is also needed to strengthen their access to quality education, health services including sexual and reproductive health services, and to ensure the fulfillment of all their rights. Young women’s economic participation and empowerment require a holistic approach by all stakeholders.