Experts call for stronger support for networks of women mediators 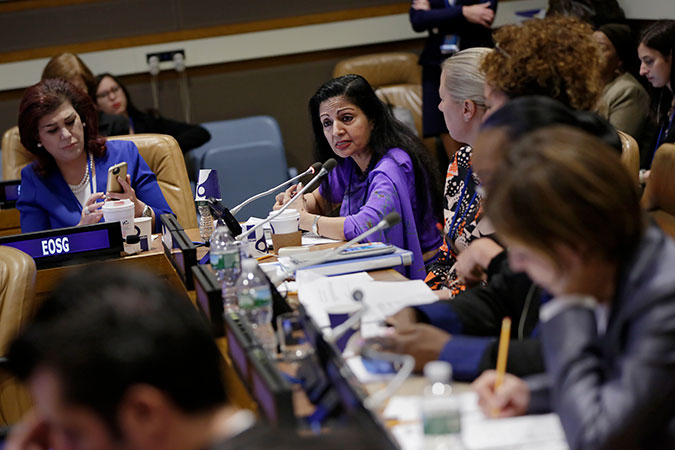 Opening the high-level meeting on women mediator networks, Angelino Alfano, Minister of Foreign Affairs and International Cooperation of Italy, stressed, “peace cannot be achieved without the decisive contributions of half of our society.” Networks of women mediators help women forge links to be more influential in formal and high-level mediation processes, he added.

The side event took place on 21 September during the 72nd UN General Assembly, bringing together for the first time, women mediators networks affiliated with Member States and regional organizations, who work to advance women’s meaningful participation in conflict prevention and peace processes around the world. The event was co-organized by the governments of Italy and Albania, the African Union and UN Women.

Women mediators networks can help ensure that women play their rightful role as leaders in peace processes. Ana María Menéndez, Senior Advisor on Policy at the Executive Office of the Secretary-General, pointed to how these networks offer a platform for sharing good practices and know-how.

Catherine Samba-Panza, former President of the Transition of the Central African Republic, and member of both the AU Panel of the Wise and the African Women Leaders Network, recalled the AU efforts to involve women in peace and security initiatives. She stressed the need for networks of women mediators to reflect the diversity of women peace actors, build peace platforms beyond political affiliations, and recommended the adoption of a quota for women’s participation in mediation teams.

Jutta Urpilainen from the Nordic Women Mediators Network and Foreign Minister’s Special Representative on Mediation, Finland, noted, networks of women mediators help to amplify women’s voices in mediating peace efforts at all levels. They also provide a pool for appointments of women as lead mediators and special envoys. 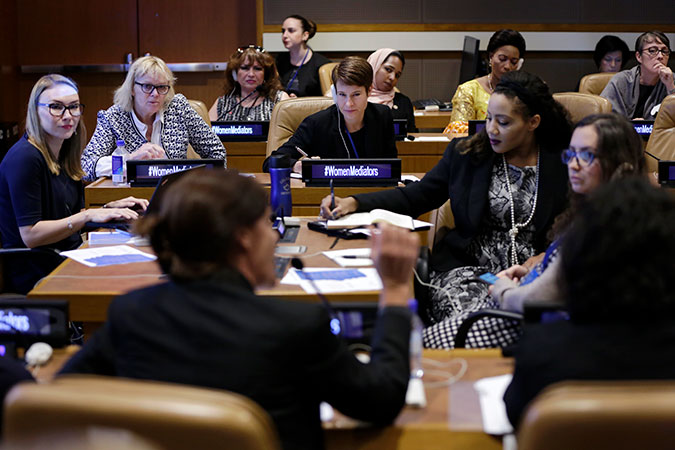 High-level event on "Women Mediators Network: From Paper to Practice" during the 72nd UN General Assembly focuses on how to strengthen synergies for greater efficiency and impact. Photo: UN Women/Ryan Brown

There was consensus that the way forward must include synergy and complementarity among the networks. The United Nations, regional organizations and Member States must also show concrete support to these women mediator networks. This support might be through the provision of resources, strategic appointments and training opportunities. The continued success and sustainability of these networks will depend on this support.

Moderated by Thania Paffenholz, Director of the Inclusive Peace and Transition Initiative at the Graduate Institute of International and Development Studies of Geneva, the event also featured Ditmir Bushati, Minister of Foreign Affairs, Albania and Irene Fellin, President, WIIS Italy and Associate Fellow, IAI Istituto Affari Internazionali. It paved the way toward the launch of the Mediterranean Women Mediators Network in Rome, Italy, from 25 – 26 October 2017.

Related News
20/10/2020
From where I stand: “It won’t be easy… reach out, grab the baton and keep running forward”
25/09/2017
Taking women, peace and security to the next level in Africa
07/07/2015
UN Women Executive Director returns to South Sudan
14/05/2013
In the words of Saran Keïta Diakité: Girls receive a visit from a different man every night, a ‘new husband’
24/10/2022
Kenyan women lead peace efforts in longstanding conflicts
END_OF_DOCUMENT_TOKEN_TO_BE_REPLACED