Coverage: Women’s meaningful participation in peace—where are the barriers and what can be done? 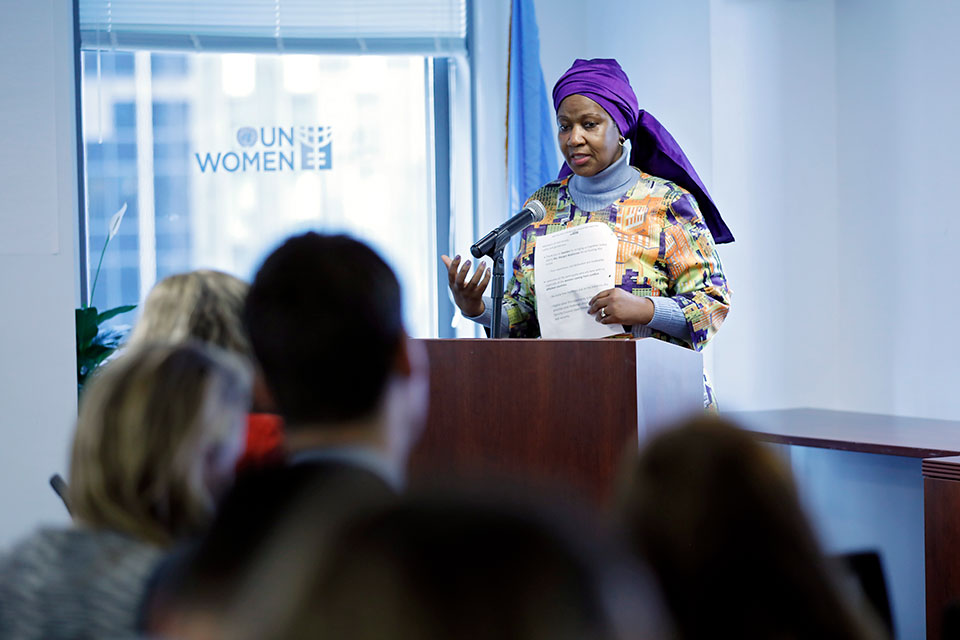 Building and sustaining peace needs women’s voice and leadership. When women are included in peace processes, peace agreements are more likely to last for 15 years or more. Yet, just two years shy of the 20th anniversary of the UN Security Council resolution 1325, which placed women’s meaningful participation at the heart of peacebuilding, conflict prevention and recovery, the role of women continue to be neglected.

“Women need to be part of negotiations, mediations, political processes, peacebuilding and implementation of peace agreements,” said Minister for Foreign Affairs of Sweden, Margot Wallström, in her opening remarks at an interactive forum organized by UN Women, the Swedish Ministry of Foreign Affairs and the NGO Working Group on Women, Peace and Security, on 23 October in New York.

“We need to stop talking about implementation, we need to act,” Minister Wallström added, citing Sweden’s feminist foreign policy as an example, which has driven Sweden’s actions on Women, Peace and Security. 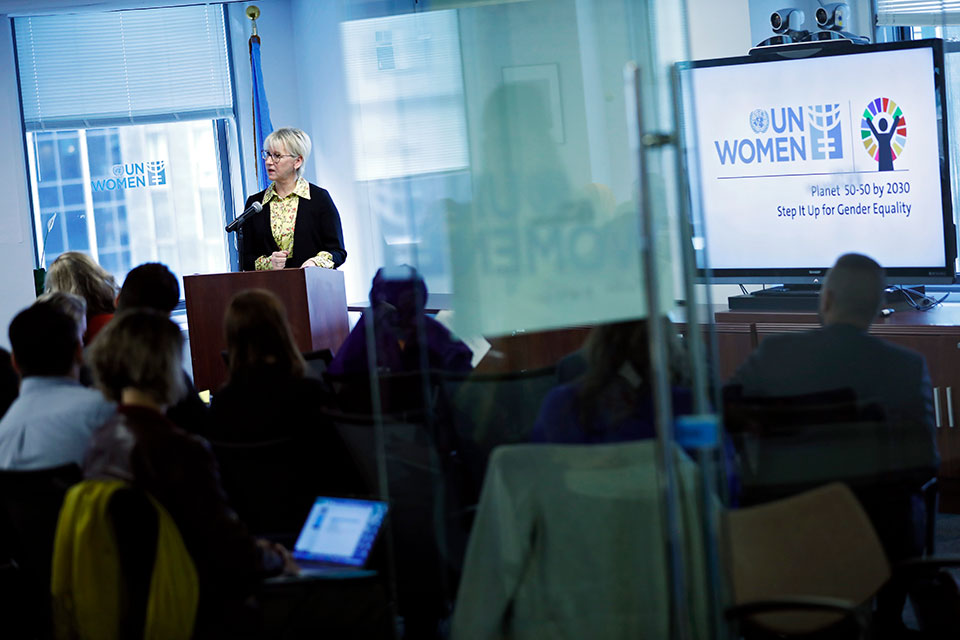 Taking place on the sidelines of this year’s annual UN Security Council Debate on Women, Peace and Security, the Forum brought together women peace activists from conflict contexts around the world, with UN Security Council members and UN experts to discuss existing barriers to women’s meaningful participation and strategies to accelerate women’s leadership in peace processes.

“We are meeting at a time when we are focused on the road to 2020,” reminded UN Women Executive Director Phumzile Mlambo-Ngcuka. “2020 is a year of many important landmarks; it is 25 years of Beijing, it is 20 years of (UNSCR) 1325 and it is five years of the SDGs. We need to win at all fronts for progress to be meaningful.”

She shared her insights from her recent AU-UN joint missions to Sahel and South Sudan, where she met women who are working for peace. “Even in countries where there is relative peace, the hardship is just too much. There is no infrastructure, there is no security, child marriage is an everyday occurrence, there’s food insecurity… and the end is not in sight,” she said.

The Executive Director of NGO Working Group on Women, Peace and Security, Kaavya Asoka, stressed on the importance of consulting civil society when deliberating about the future of peace and security and paying attention to the shrinking space for human rights defenders and women’s human rights defenders. “The experiences, challenges and recommendations that come from civil society should be at the core of the Security Council priorities,” she said. “This means we must be listening to women who experience conflict on the ground and those who are working towards peace.” 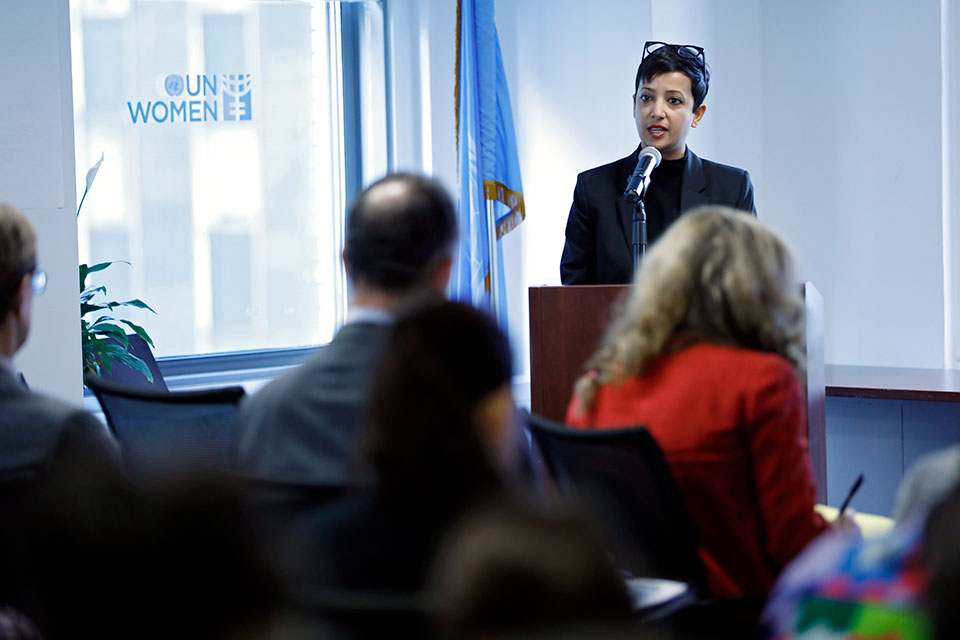 Sharing insights from the newly released Secretary-General’s Report on Women, Peace and Security and the findings of the Expert Group Meeting recently conducted by UN Women, Deputy Chief of Peace and Security, UN Women, Sarah Douglas drew attention to the need to adjust strategies to the changing nature of conflicts and peacebuilding: “The Notion of peace table where we try to get women to, is often evaporating in many contemporary conflicts, so how do we adjust our strategies with this new reality?” The findings also reveal discrimination and patriarchy and an overall lack of acknowledgment of the intelligence that women bring to the table ultimately limits their participation.

Other challenges that participants raised included barriers to women’s political participation and inclusion; ignoring the diversity of women; lack of funding and protection for women in politics or those defending women’s rights; as well as the inferior quality of gender analysis informing the decisions of the Council.

“Political inclusion may be beyond representation, because you may be representing women, but women’s voices may not be heard,” shared Sawsan Al-Refai from Yemen.

“In the case of Syria—we have had to push for women’s participation at every step, from the start of peace process to the constitutional process,” said Rajaa Altalli, one of the 12 members of the Women’s Advisory Board appointed by the UN Special Envoy for Syria. “The peace table is important of course, but everything around the table is important too. When the peace agreement is signed, it does not mean peace is reached. When we talk about participation, we need to include women in the later process too.”

The recommendations stemming from women peacebuilders included measures such as: incorporating gender-specific clauses in all resolutions, briefings and statements coming out of the UN Security Council; establishing a systematic mechanism and investment for including women and civil society representatives in briefing the Security Council in its various sessions; making sure that mediators are gender-sensitive; strengthening the substantive gender-conflict analysis; modeling and exceeding the UN’s gender parity strategy by creating a feminist peace agenda for 2020; and addressing gender biases in economic recovery plans.

Several countries have declared themselves to have a feminist foreign policy, @SweMFA and @CanadaFP. It is a radical project and we are all involved. - @amgoetz, Professor @NYUCGA. #UNSCR1325 #WPSin2020 pic.twitter.com/pg3VbMPPEl

“Peacebuilding requires women’s empowerment and women’s economic independence,” said Veronica Cordova Sopria, Deputy Permanent Representative of Bolivia to the UN. “As long as women are not economically empowered, it’s very difficult to reconstruct the fabric of society after a conflict.”

The Plurinational State of Bolivia is presiding over the Security Council Open Debate on 25 October, which will focus on the theme, “Promoting the implementation of the Women, Peace and Security Agenda and Sustaining Peace through Women’s Political and Economic Empowerment.”

Related News
20/10/2021
Take five: Investing in gender equality and women peacebuilders makes for lasting peace
20/08/2021
Strengthening women’s meaningful participation in peace processes
21/10/2020
In the words of Miriam Coronel-Ferrer: “I became the first female negotiator to sign a final peace accord with a rebel group”
28/10/2019
The power of women peacebuilders
08/08/2019
From where I stand: “Young women's inclusion in peacebuilding will create sustainable peace”
END_OF_DOCUMENT_TOKEN_TO_BE_REPLACED