How the Islamic State talked women into subjugation: New UN Women report analyzes the use of gendered messaging by ISIL

Today, UN Women launched a new report that examines the use of gendered messaging by the terrorist group, Islamic State in Iraq and the Levant (ISIL) as its control and governance tactics. The report, based on analysis of ISIL’s magazines in Arabic, English and French, was released at an event in New York, co-organized by UN Women, the United Kingdom Mission to the UN and the Permanent Mission of Finland to the UN. 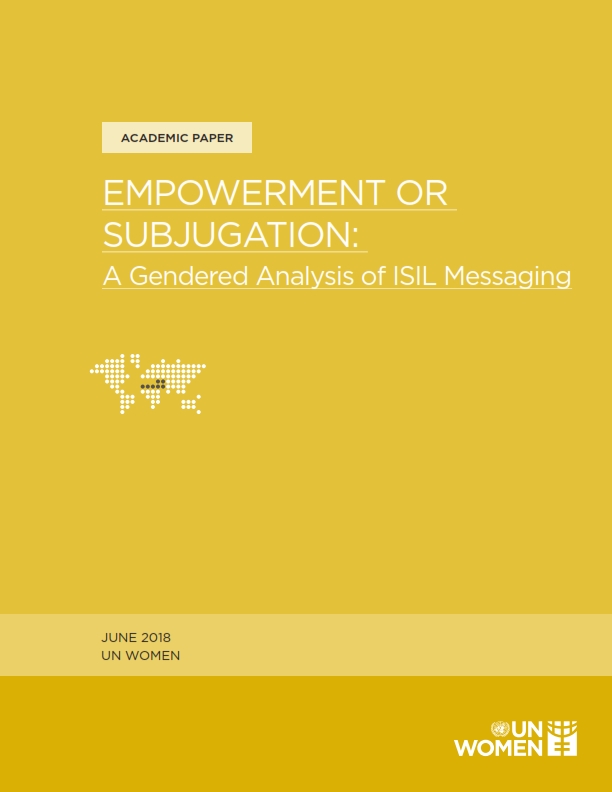 Empowerment or Subjugation: A Gendered Analysis of ISIL, generously funded by the Government of Finland, shows how ISIL strategically crafted its messages to women to persuade them to travel to its territory and to adhere to its moral code and governance model, which include women’s strict obedience to their husbands. It also highlights how its language targeting men, spoke to gendered issues of power and dominance.

The report reveals that the terrorist group used women and purportedly women’s voices and experiences as tools to promote its rigid social order and the subjugation of women. The extremist group also used a radical interpretation of religion in contradictory and self-serving ways. For example, to justify greater freedoms for women to travel on their own to ISIL-controlled areas, but also to justify severe limitations on the basic movement of women living in ISIL territories.

“If a false sense of empowerment attracted women to join ISIL, we need to make its worldview known for what it is,” said Mohammad Naciri, Regional Director of UN Women for Arab States.

In recent years, there has been greater recognition of the interplay of issues of gender equality, violent extremism and peace and security. In response to the UN Security Council’s resolution 2242 in 2015, which explicitly acknowledged these inter linkages and called for gender-sensitive research and data on the drivers of radicalization for women, UN Women, with generous funding from the Governments of Japan and Finland, commissioned research on the issue. In addition, as part of the funding from Japan, a regional programme focusing on preventing violent extremism through women’s empowerment at the community level was rolled out in Indonesia and Bangladesh in 2017.