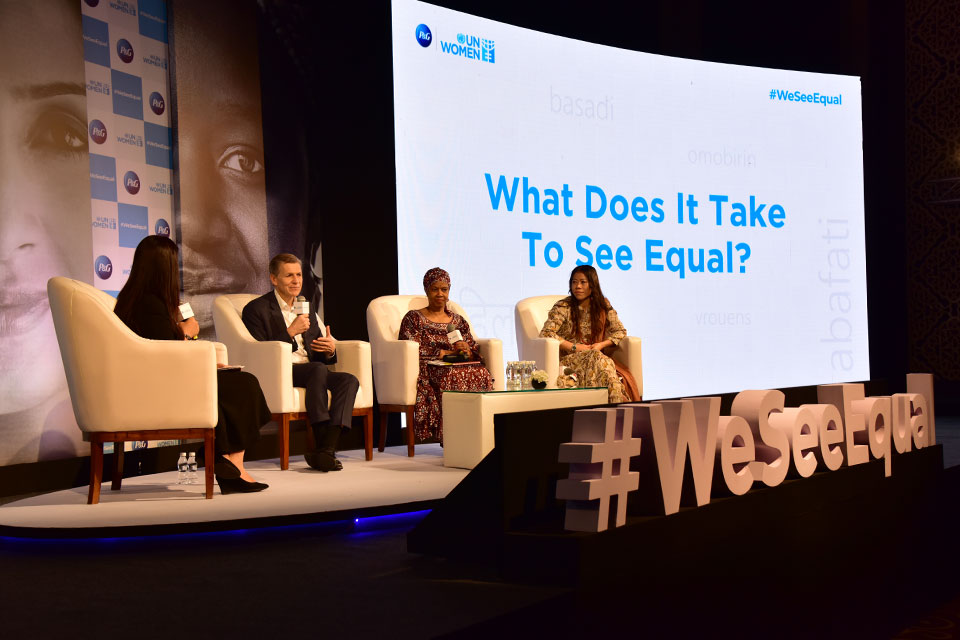 UN Women Executive Director Phumzile Mlambo-Ngcuka is visiting India this week to meet with gender equality advocates, youth and private sector partners to build momentum towards the upcoming 63rd session of the UN Commission on the Status of Women (11-22 March), and to re-ignite public discourse towards the full implementation of the visionary Beijing Platform for Action.

On Monday, 18 February, the Executive Director attended the #WeSeeEqual Summit in Mumbai, India, a symposium co-hosted by Procter & Gamble (P&G)  and UN Women, which brought together leading voices from business, media, government and civil society to discuss ways to advance gender equality in the workplace, the role of advertising and media to bust the myths that hold women back and the importance of male champions of gender equality. During the event, P&G announced an investment of USD 100 million in women-owned businesses and to educate more than 23 million adolescent girls on puberty and hygiene across India, Middle East and Africa. Read the press release>

Ms. Mlambo-Ngcuka will meet with key partners to promote women’s economic empowerment, in line with the recommendations of UN Secretary-General’s High-Level Panel on Women’s Economic Empowerment and solicit commitments from the private sector to sign on to Women’s Empowerment Principles, a set of seven principles developed by UN Women and UN Global Compact that guide companies to implement actions to promote gender equality in the workplace, market and community. 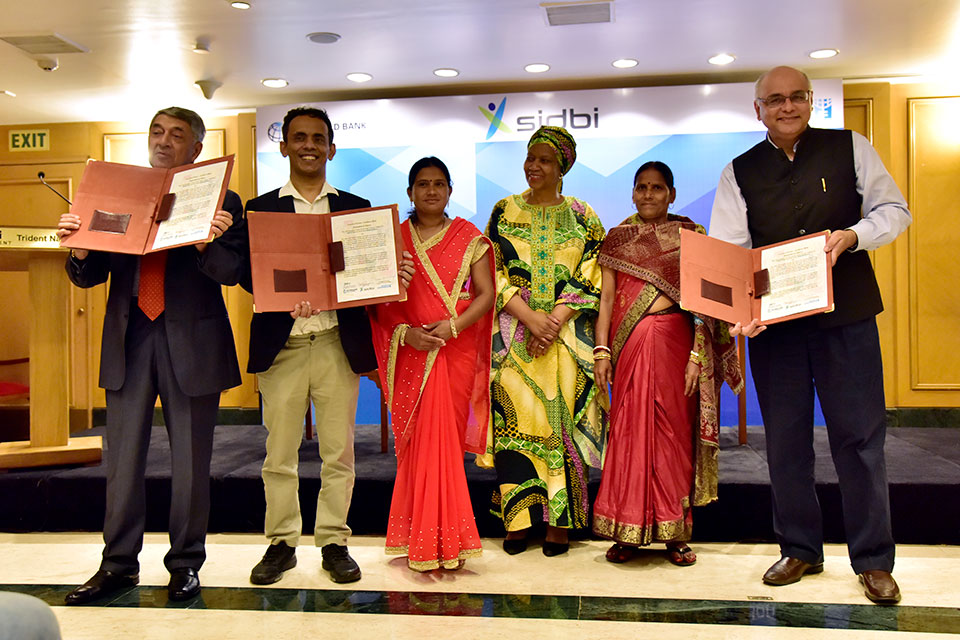 At 27 per cent, India has one of the lowest female labour force participation and women constitute 94 per cent of the informal sector. It’s also one of the fastest growing major economies in the world. The Executive Director will participate in a number of meetings with key partners in the informal sector to develop a road map towards tackling the systemic barriers to women’s economic empowerment and to uplift the most marginalized women. 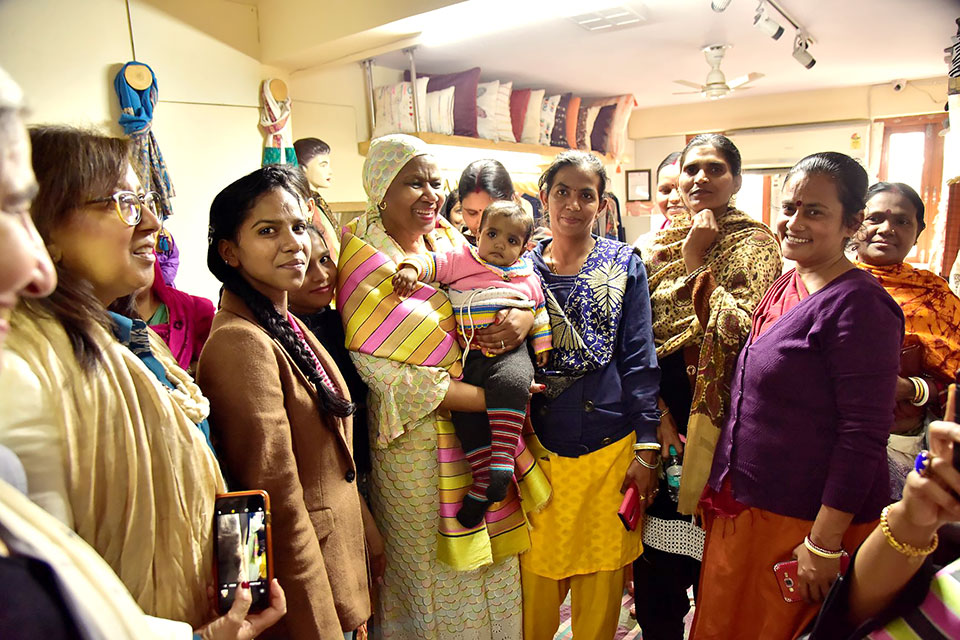 She will also visit a community in New Delhi, where UN Women’s partner Self-Employed Women’s Association (SEWA) is working with close to 7,000 workers in the informal sector to equip them with practical tools, such as skills, access to financing and marketing knowledge to improve their livelihoods and social security. 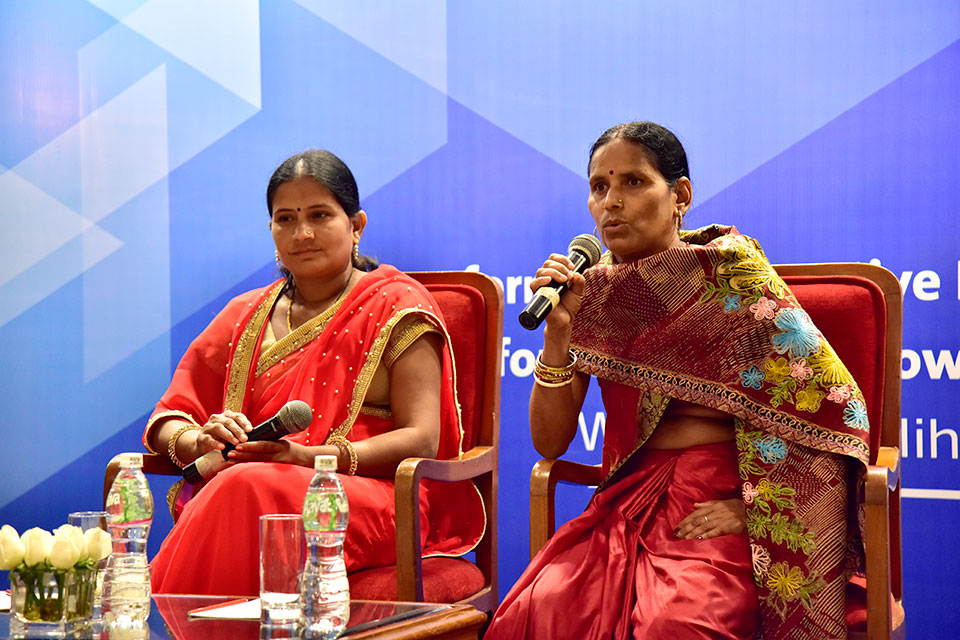 Archana from Maharashtra, and Sudha from Bihar, shared their journey from being members of women’s collectives to becoming entrepreneurs – shareholders to stakeholders. Photo: UN Women/Sarabjeet Dhillon

In India, the Executive Director will meet civil society and youth activists to discuss priority areas of action to accelerate progress towards gender equality, leading up to 2020, when several intergovernmental processes will mark important milestones, including the 25th anniversary of the Beijing Platform for Action, one of the most progressive blueprints for achieving women’s rights worldwide, five years into the implementation of the Sustainable Development Goals and 20 years since the adoption of UN Security Council resolution 1325 on women, peace and security.

During the visit, the Executive Director will attend the Mumbai premiere of SON RISE, a documentary on gender-based sex selection in the State of Haryana, India, and join a panel discussion with the film-maker Vibha Bakshi and leaders from the communities.