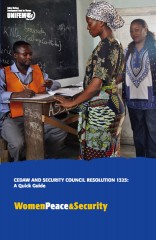 Established international norms and standards promote the protection of women during armed conflict and their participation in peace and security decision-making. Two sets of standards, UN Security Council resolution 1325 on women, peace and security (UNSCR 1325), and the Convention on the Elimination of All Forms of Discrimination Against Women (CEDAW), are critical tools for moving the gender equality agenda forward in conflict and postconflict situations.

While both sets of standards are important in their own right, there is also a synergy between them that can enhance their implementation and impact. UNSCR 1325 helps to broaden the scope of CEDAW's application by clarifying its relevance to all parties in conflict and in peace. CEDAW, in turn, provides concrete strategic guidance for actions to be taken on the broad commitments outlined in UNSCR 1325. Drawing on these instruments together will enable advocates to maximize the impact of norms and standards for gender equality in all conflict and post-conflict interventions.

This brief overview provides a basic introduction to each set of standards, as well as the context within which they were developed. It reviews the commonalities and potential strategic uses of UNSCR 1325 and CEDAW. It begins with a description of their shared gender equality agenda and includes a discussion of:

This guide aims to support gender equality advocates in bringing the greatest possible political and legal authority to bear on efforts to advance gender equality in the context of peace and security.