Documents of Executive Board sessions, informal briefings, and other meetings in 2022:

* Previous years can be accessed via the Executive Board Documents page.

Note: All UN-Women Executive Board meetings respect the sustainability initiatives observed across United Nations entities. Documents and statements will be made public on this website and Member State interventions can be accessed via the Executive Board eStatements (UN Journal) portal as soon as they are made available. 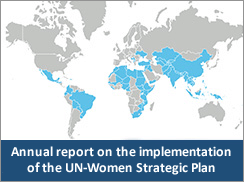 UN Women Strategic Plan 2022–2025
The Strategic Plan 2022–2025 will guide UN Women for the next four years—with an eye toward the 2030 deadline to achieve the Sustainable Development Goals (SDGs). It articulates how UN Women will leverage its unique triple mandate—encompassing normative support, UN system coordination, and operational activities—to mobilize urgent and sustained action to achieve gender equality and the empowerment of all women and girls and support the achievement of the 2030 Agenda for Sustainable Development. More

Annual Report 2019–2020
The Annual Report documents UN Women’s work to foster women’s empowerment and gender equality around the world. It highlights some of the organization’s initiatives during the year and provides summary financial statements, a list of new programmes and projects, and contact information. More