National constitutions are fundamental guides for organizing governance structures and establishing agreed legal principles. Over time, reforms or redrafting open opportunities for countries to embed or expand gender equality provisions. This is in line with the Convention on the Elimination of All Forms of Discrimination against Women, which calls on signatory states to embody the principle of gender equality in their constitutions. They should also act to realize this principle across all aspects of their legal systems, including by changing discriminatory laws, adopting statutes that advance gender equality and women’s empowerment, and ensuring that legal practices uphold women’s rights.

An important focus of UN Women’s work on constitutions and legal reform entails supporting national partners to integrate gender equality principles. We also help foster consensus around implementing reforms so that they become a lived reality for women.

In Morocco, the Movement on Parity, assisted by UN Women, became a powerful voice for women during constitutional redrafting. As a result, the new Constitution enshrines gender equality, opening the door for a new law doubling the number of parliamentary seats reserved for women. In the most recent national elections, all political party platforms made commitments to gender equality, and the number of women in Parliament surged from 10 to 17 per cent.

In Montenegro, UN Women supported the Department of Gender Equality in advocating to amend the Labour Law to include equal pay for equal work. An amendment to the Law on Civil Servants made gender equality training mandatory for all public employees.

The former Yugoslav Republic of Macedonia amended its Law on Equal Opportunities between Men and Women. It now requires State institutions to incorporate the principle of equal opportunities in strategic plans and budgets, and track impacts on women and men, including through collecting sex-disaggregated data. 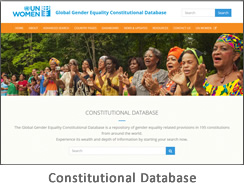