UN Women’s work under the women, peace, and security (WPS) agenda is guided by a robust set of internationally agreed norms and standards. Ten UN Security Council resolutions form the foundation of the women, peace, and security agenda. These resolutions and related thematic and country-specific decisions by the Security Council and other bodies—such as the UN General Assembly, the Peacebuilding Commission, and the Human Rights Council—promote gender equality and strengthen women’s participation, protection, and rights across the conflict cycle, from conflict prevention to post-conflict reconstruction.

Contents of this page:

2015 peace and security reviews and their follow-up

Reports of the Secretary-General on women and peace and security

Reports of the Secretary-General on conflict-related sexual violence

Reports of the Secretary-General on sexual exploitation and abuse 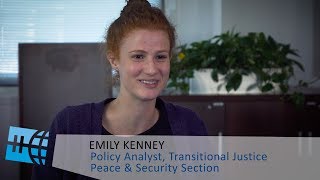 Preventing conflict, transforming justice, securing the peace
The Global study on UN Security Council resolution 1325 reviews the challenges and lessons learned across regions in implementing the women, peace and security agenda since 2000. The study provides a comprehensive evidence base demonstrating that women’s equal and meaningful participation in peace and security efforts is vital to sustainable peace. Read more

A series of courses developed by UN Women in partnership with the Peace Operations Training Institute aims to raise awareness, build capacities and promote the implementation of UN Security Council resolutions on women, peace and security. The three courses focus on national and regional implementation in Africa, Asia-Pacific and Latin America and the Caribbean, respectively.