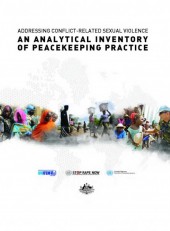 Despite increased attention to the women, peace and security agenda since the UN Security Council unanimously adopted resolution 1325 in October 2000, major analytical and implementation gaps remain. One such gap is the effort to combat conflict-related sexual violence — the premise of subsequent Security Council resolutions 1820 and 1888 — and the potential of uniformed peacekeepers to help fight such violence.

Addressing Conflict-Related Sexual Violence — An Analytical Inventory of Peacekeeping Practice captures best practices and emerging elements for a more effective response by peacekeepers to women's security concerns. From initiating firewood patrols in Darfur to establishing market escorts, night patrols and early-warning systems in the Democratic Republic of Congo, the document catalogues direct and indirect efforts to combat sexual violence during and in the wake of war.

While the focus of this publication is on the practical methods by which military, police and civilian peacekeepers can prevent sexual violence, it is also part of a broader agenda to improve the capacities of peacekeepers to protect civilians effectively.