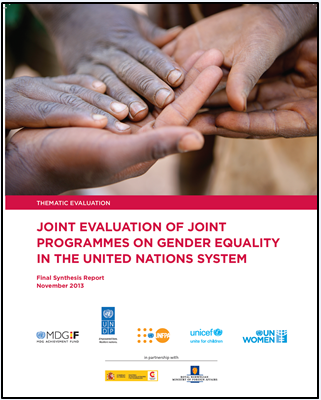 In 2012–2013, UN Women, UNDP, UNICEF, UNFPA and the MDG-Fund, in partnership with the Governments of Norway and Spain, undertook a corporate joint evaluation of joint programmes on gender equality in the United Nations system to address a gap in evidence on country-level joint gender programmes (JGPs). The scope of this evaluation covered JGPs at country level, implemented post-2006 across a range of gender-related themes.

The evaluation demonstrated the added value of JGPs as a development cooperation modality in the UN system. Despite a steep learning curve, the assessed JGPs supported governments in meeting their normative commitments, albeit to varying degrees. JGPs were instrumental in bringing gender issues into national dialogue and prompting positive policy changes. However, JGPs have not led to increased efficiencies, mainly due to systemic barriers, unclear management arrangements and weak design processes.

The evaluation provides five valuable lessons to strengthen future JGPs regarding using Delivering as One environments, investing in design stages, keeping objectives of JGP realistic, better understanding the capability of national operating architectures, and grounding accountability within the national context.

Moving forward, the evaluation found that JGPs remain an accepted and integral part of the development cooperation landscape. However, taking forward the lessons learned and sustaining the value addition will require stronger efforts from the UN system.

Gender equality for health and well-being: Evaluative evidence of interlinkages with other SDGs