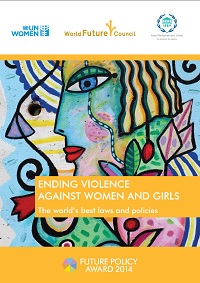 In 2014, the Future Policy Award celebrated laws and policies that contribute to ending one of the most pervasive human rights violations: violence against women and girls. One in three women worldwide suffers some form of violence in her lifetime. By restricting women’s choices and limiting their ability to act, the persistence of violence against women has serious consequences for peace and security, economic development and poverty reduction. Thus, it hampers all efforts towards a future just society. International experts from academia, civil society and international organisations have nominated twenty-five policies from around the world which were implemented to improve the lives of women. Together, they reflect the broad scope of existing policy responses at local, national and transnational levels.

Violence against women and girls has been on the political agenda for a relatively short time. Some of the most inspiring and exemplary policy approaches are still so new that assessing their effectiveness is not yet possible. However, not considering them would have excluded some of the most promising future just policy measures. Therefore, in 2014, the World Future Council also presented a “Vision Award” for the most promising policy approach, which can prove its effectiveness in the years to come.

Safe consultations with survivors of violence against women and girls

Gender-related killings of women and girls: Improving data to improve responses to femicide/feminicide