Our collaboration is also demonstrated through our engagement in the Generation Equality Forum organised by UN Women and co-hosted by France and Mexico in partnership with civil society and youth. 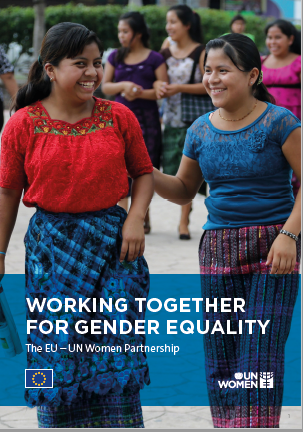 Together, we have worked in more than 90 countries worldwide to push for transformative change. We have worked to achieve stronger global norms and standards on gender equality, gender-responsive laws, policies and institutions, access to services for victims of gender-based violence, production and use of sex-disaggregated data, as well as women's political participation and leadership.

The EU and UN working hand-in-hand in full partnership under the Spotlight Initiative in 26 countries and 6 different regions, is one of the biggest investments ever made to eliminate violence against women and girls and already shows impressive results.

The impact of COVID-19 has exacerbated gender inequalities, increasing violence against women and girls, rolling back progress in in all spheres of life, including employment, health and education.

Progress towards a more gender-equal world is not linear and we need to stay vigilant and committed everywhere around the world. Some of today's crises, from Ethiopia and Yemen to Afghanistan and the war in Ukraine; all have been seriously reverting this progress. Often, narratives around war and crisis are still blind to women's experiences. We will continue to address the structural causes of gender inequality and gender-based discrimination, including actively engaging men and boys in challenging harmful and negative gender norms and stereotypes.

We will continue to work in the context of the critical priorities of the European Union and UN Women’s strategic plan. These include increased leadership, governance and participation in public life for women, women’s economic empowerment, ending violence against women and girls, peace and security, humanitarian action and disaster risk reduction, as well as climate change and digitalisation, innovation and technology.

On 20 May 2022, the EU and UN Women reaffirm their commitment to continuing the implementation of the Memorandum of Understanding of 2012 and ensure an inclusive approach that allows like-minded partners and allies to work jointly for full equality and rights of women, including with EU Member States and UN agencies. In today’s multipolar world, the EU-UN partnership, and that with UN Women carries particular political significance.

Statement: The decree barring women in Afghanistan from working in non-governmental organizations is yet another stark violation of women’s rights

Statement: The decree barring women in Afghanistan from working in non-governmental organizations is yet another stark violation of women’s rights