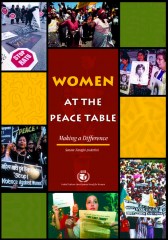 Women at the Peace Table: Making a Difference

Despite comprising more than 50 percent of the world's population, women continue to remain under-represented as peace negotiators, whether in the context of a leader, decision-maker or elected official.

Throughout history, they have waited on the sidelines of war, while men's actions decided their fate. Women, whose voices could not be heard, have been widowed, orphaned, displaced from their homes, and worse. "Women at the Peace Table" tells of the inspiring stories of the women who, tired of watching and waiting, decided to become active members in negotiating peace amidst their countries' conflicts.

In Northern Ireland, women collaborated on cross-community programs relating to child care, health and micro-enterprise. In Rwanda, Burundi and Bosnia, women have been at the forefront of community-based conflict resolution and reconciliation projects. In South Africa women employed a quota system, lobbying for 50 percent representation in Parliament. These are a just a sample of the inspiring stories that discuss the vast experiences of women who were committed to becoming involved in peace negotiations, as well as the strategies they adopted.