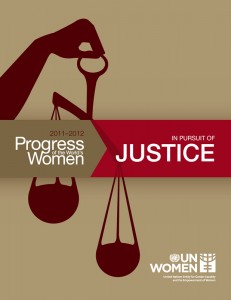 Progress of the World’s Women: In Pursuit of Justice

The past century has seen a transformation in women's legal rights, with countries in every region expanding the scope of women's legal entitlements. Nevertheless for many of the world's women the laws that exist on paper do not translate to equality and justice.

Progress of the World's Women: In Pursuit of Justice looks at how the legal system can play a positive role in women accessing their rights, citing cases that have changed women's lives both at a local and at times global level. It also looks at the important role women have played and continue to play as agents for change within the legal system, as legislators, as lawyers, as community activists but also asks why, despite progress on legal reform, the justice system is still not delivering justice for all women.

The report focuses on four key areas: legal and constitutional frameworks, the justice chain, plural legal systems and conflict and post-conflict. Drawing on tangible examples of steps that have been taken to help women access justice, the report sets out ten key recommendations for policy and decision makers to act on in order to ensure every woman is able to obtain justice.