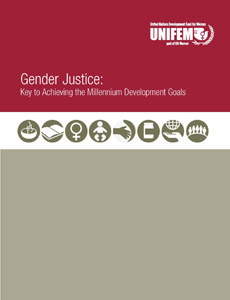 Hence, gender justice entails ending the inequalities between women and men that are produced and reproduced in the family, the community, the market and the state. It also requires that mainstream institutions — from justice to economic policymaking — are accountable for tackling the injustice and discrimination that keep too many women poor and excluded

Gender Justice shows how addressing inequalities, including gender inequality, will be essential to achieving the MDGs.