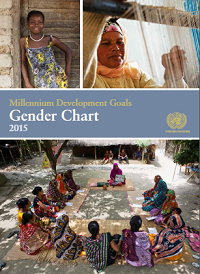 The final edition of the Gender Chart details how women were faring in global progress in 2015, as the MDGs wrap up and the Sustainable Development Goals begin to take their place. The 2015 Gender Chart, an addendum to the UN Secretary General's 2015 Millennium Development Goals Report, tracks how gender equality is impacted across all the MDGs. By looking at the other goals from a gender perspective, the Gender Chart also emphasizes the inter-linkages between the goals and gender equality and women's empowerment, in making progress on development and in achieving the MDGs.

The 2015 Gender Chart shows that while progress has been made in a number of the gender dimensions of the MDGs, such as in education, where the gender gap in youth literacy has narrowed, and in maternal mortality, which has declined by nearly 44 per cent since 1990, more needs to be done. Women and girls need to be at the centre of any development imperative. And now, with Member States jointly adopting the ambitious 2030 Agenda for Sustainable Development, the aim is clear: Pick up where the MDGS left off, and ensure a comprehensive agenda that fully addresses gender equality and women’s empowerment head on.

The 2015 Gender Chart was jointly produced by UN Women and the UN Statistics Division for the Inter-Agency and Expert Group on MDGs Indicators. The gender chart has been a recurring publication that charted progress towards the time-bound targets set by world leaders in 2000 from a gender perspective.