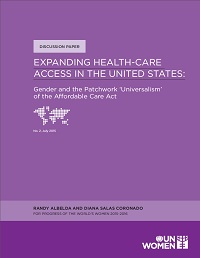 This paper focuses on the ways in which women in the United States are impacted by the 2010 passage of the Patient Protection and Affordable Care Act (usually referred to as ACA or ‘Obamacare’). The ACA’s three main goals of expanding access, increasing consumer protections and reducing costs while increasing quality of services will improve coverage, access to services and types of services that benefit women (and men). However, universal coverage remains illusive due to employer-based insurance coverage that allows firms to make decisions about coverage type. This patchwork universalism is the result of political decisions to extend rather than transform the current health-care system and as such reproduces many of the previously existing problems of uneven costs and coverage. The paper argues the ACA is consistent with other sets of US social welfare and labour market regimes that stratify access to social protections by income, race/ethnicity and gender as well as provide individual states with administrative and policy authority. The paper concludes that the passage of ACA will vastly improve health-care coverage in the United States, however, will continue to leave millions of people uninsured. This paper was produced for UN Women's flagship report Progress of the World's Women 2015-2016 and is released as part of the UN Women discussion paper series.

Family-oriented cash transfers from a gender perspective: Are conditionalities justified?