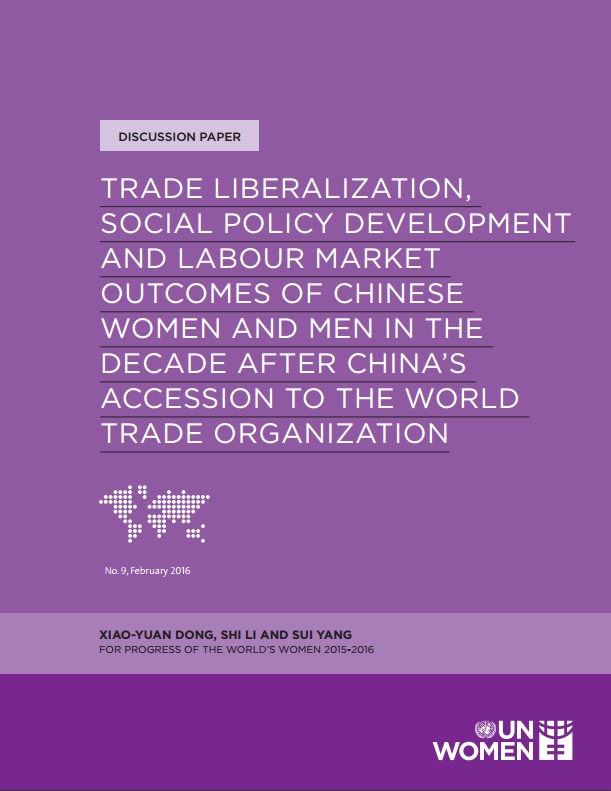 Trade liberalization, social policy development and labour market outcomes of Chinese women and men in the decade after China’s accession to the World Trade Organization

How trade liberalization affects women’s position in the labour market and what role public policy should play to make the process work better for women are among some of the most debated issues in academic communities and in policy-making arenas. This paper sheds light on these contentious issues by analysing the trends in labour market outcomes of women and men in China in the decade after its accession to the World Trade Organization.

Using data from the 2002 China Household Income Project and the 2008 and 2010 Rural-Urban Migration in China project, the analysis shows that between 2002 and 2010, women’s labour force participation increased and rising women’s labour force participation was associated with a dramatic shift in labour allocation from agricultural labour to wage employment in industry and services. Moreover, women and men at all income quintiles experienced rapid wage growth. However, the benefits of economic success following the WTO succession were not evenly distributed between both women and men. The gender gaps in both earnings and low pay-rates actually increased. The paper concludes by noting that despite China's remarkable success in creating productive employment and reducing income poverty, economic growth alone is insufficient for achieving gender equality in the labour market.

This paper was produced for UN Women's flagship report Progress of the World's Women 2015-2016 to be released as part of the UN Women discussion papers series.