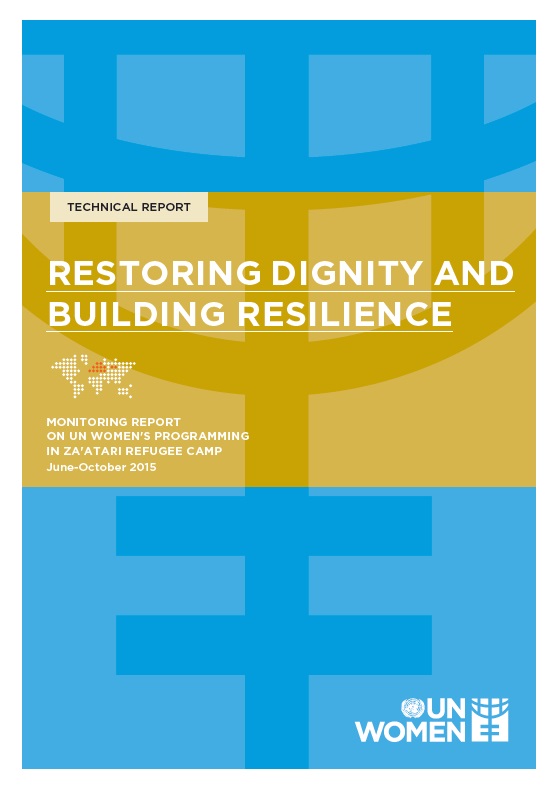 UN Women Jordan’s cash-for-work programme in refugee camp settings, initiated in January 2013, targets the most vulnerable women living in Za’atari refugee camp, assisting 1,000 people through roughly 200 opportunities per day. In the context of shifting from a pure humanitarian response to a longer-term resilience-based response, the programme seeks to restore dignity and normalcy to refugees by providing them with ways to engage their skills and labour in the camp-based economy. The programme combines cash-for-assistance with the provision of social services such as day care, emergency medical support, life skills and remedial education and civic engagement, to provide a holistic approach to supporting women’s empowerment and gender equality.

The report presented reflects the findings of programme monitoring undertaken in 2015. The data highlights the importance of engaging people productively to build gender equality and combat violence against women, while also enhancing household dietary diversity and food security through increased household spending. Respondents—both male and female—highlighted economic opportunities as the key priority for international support. The report notes, using inter-agency data, that currently there are roughly 6,400 cash-for-work opportunities available per day in camp settings, of which women receive 24 per cent. The majority of women interviewed—75 per cent—state a preference for working outside the home.

Isolation and boredom are highlighted as key challenges facing women and girls in Za’atari camp, with access to economic empowerment and public space as instrumental in breaking this isolation. Around 91 per cent of women interviewed stated that the safe spaces for women help them recover self-esteem and their independent sense of identity. Moreover, engagement in the programme has led to a marked decrease in domestic violence—a reported 20 per cent decrease—among the beneficiary population, with the opportunity to leave the home stated as the primary reason for this reduction.

15 July 2013
Gender-based Violence and Child Protection among Syrian Refugees in Jordan, with a Focus on Early Marriage