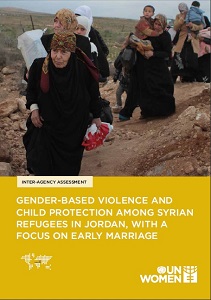 This study was undertaken on behalf of the Child Protection and Gender-Based Violence sub-working groups in Jordan, established in February 2012 to coordinate prevention and response to child protection and gender-based violence against children and adults affected by the crisis in Syria and who are living in camps, sites, and host communities.

This assessment was conducted to obtain a more comprehensive understanding of the risks that Syrian refugee families — especially women and girls — face in Jordan, and to provide a deeper understanding of Syrian urban refugees’ knowledge, attitudes, and practices towards gender-based violence against adults and children, including early marriage. It was carried out with the participation of a range of community-based stakeholders in 11 of Jordan’s 12 governorates. The findings are based on a solid methodology including: i) a questionnaire distributed to 613 refugees per household residing outside of the Za’atari refugee camp, representing 3 per cent of registered households in Jordan as of October 2012; ii) 34 focus group discussions held in all regions so as to gain qualitative information about economic and physical security, major trends with regards to gender-based violence and child protection issues, and information about quality and access to services; iii) 45 in-depth interviews with key informants, community leaders and service providers from all regions, selected for their knowledge about the living conditions of the target population.

Findings from this report reveal that rates of early marriage are high, a significant percentage of children contribute to household income or are its main source of income, and restrictions on the mobility of women and girls constrain their participation in social and economic activities and their access to basic services. Given that a number of indicators, ranging from early marriage to school absenteeism and non-enrolment to child labour, are strongly conditioned by the circumstances of refugee life, the assessment concludes that these are likely to increase exponentially as the situation of displacement lengthens and the refugee population continues to grow.

Women and Violent Radicalization in Jordan

Understanding why youth fight in the Middle East: The case of Pankisi

1 July 2019
Understanding why youth fight in the Middle East: The case of Pankisi