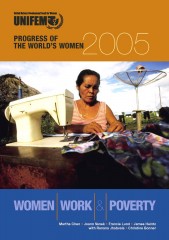 Progress of the World’s Women 2005: Women, Work and Poverty

This report marks the fifth anniversary of the UN Millennium Declaration and the tenth anniversary of the Beijing Platform for Action. It argues that unless governments and policymakers pay more attention to employment, and its links to poverty, the campaign to make poverty history will not succeed, and the hope for gender equality will founder on the reality of women's growing economic insecurity.

Progress of the World's Women 2005: Women, Work and Poverty makes the case for an increased focus on women's informal employment as a key pathway to reducing poverty and strengthening women's economic security. It provides the latest available data on the size and composition of the informal economy and compares national data on average earnings and poverty risk across different segments of the informal and formal workforces in six developing countries and one developed country to show the links between employment, gender and poverty. It looks at the costs and benefits of informal work and their consequences for women's economic security. Finally, it provides a strategic framework — with good practice examples — for how to promote decent work for women informal workers, and shows why strong organizations of workers in the informal economy are vital to effective policy reforms.

This report can and should be used as a call to action to help advocates, policy makers, governments and the international community “make poverty history.”

Progress on the Sustainable Development Goals: The gender snapshot 2022

7 September 2022
Progress on the Sustainable Development Goals: The gender snapshot 2022

Progress on the Sustainable Development Goals: The gender snapshot 2021

17 September 2021
Progress on the Sustainable Development Goals: The gender snapshot 2021