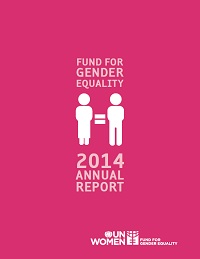 In 2014, UN Women's Fund for Gender Equality (FGE) supported 67 active programmes in 60 countries and reached over 310,000 direct beneficiaries. The Fund's programmes, led by civil society organizations, work to advance women's political and economic empowerment at local, national and regional levels across the globe. The 2014 Annual report highlights key aggregated results of the active programmes, lessons learned from grantees and emerging promising practices in the strategies used by FGE partners. As of 31 December 2014, a total of USD 56.5 million has been awarded to 96 programmes in 72 countries, reaching over 9.8 million direct beneficiaries since the Fund's establishment in 2009.

Some key results from 2014 include: