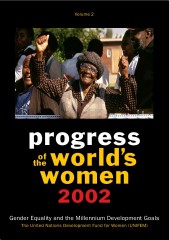 Progress of the World's Women 2002, Volume 2: Gender Equality and the Millennium Development Goals

There are more than 140 million illiterate young people in the world; more than half (86 million) are women. This is one example of why 189 nations adopted women's empowerment and gender equality as one of the eight Millennium Development goals set during the 1990s. The publication "Progress of the World's Women 2002" quantifies country-by-country progress (or lack thereof) towards meeting these goals.

"Progress of the World's Women 2002: Volume 2: Gender Equality and the Millennium Development Goals" is the second edition of a biennial publication first produced in 2000 to track and measure the world's commitment to gender equality. It assesses improvements made towards women's empowerment within the context of the Millennium Development Goals, a set of eight goals created by the international community in 2000 to focus global efforts to end poverty, hunger and inequality. Analyzing the indicators for Goal 3 - 'Promote gender equality and empower women' - "Progress 2002" examines progress for women, or the lack of it, in education, literacy, non-agricultural wage employment and parliamentary representation.

"Progress 2002" indicates that women are still primarily absent from parliaments. Furthermore, the report also shows that unlike the other indicators of progress which illustrate differences between wealthy and poor countries, there are no such differences in terms of women's participation in national governments. "Progress 2002" also provides basic targets for the year 2000 include primary education for 80% of school-age children, life expectancy not less than 60 years in any country, and maternal mortality reduced by one-half of the 1990 levels. These targets, as well as future goals such as closing the gender gap in secondary education and the employment market are examined. "Progress of the World's Women 2002" charts these and other areas, ranking each country in terms of gender achievement.

Gender equality and the empowerment of women are important factors in combating poverty, hunger and disease and stimulating development that is truly sustainable. "Progress of the World's Women 2002" provides a snapshot of the state of women's lives and how much further we have to go to achieve equality.

How can we reach gender parity at the United Nations by 2028? A collection of good practices to mark five years of the Secretary-General’s System-wide Strategy on Gender Parity