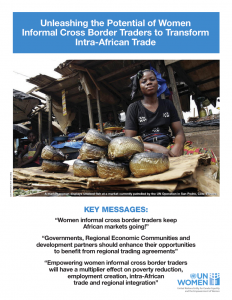 Empowering women in informal cross border trading has a positive multiplier effect on poverty reduction, economic growth, government revenues and employment creation, among other factors. In Africa, for instance, the contribution of women informal traders to national GDP amounts to 64 percent of value added in trade in Benin, 46 percent in Mali and 41 percent in Chad.

UN Women has been working on women in informal cross border trade since 2005, starting with comprehensive baseline studies in each sub-region to inform its programming. It has also worked to encourage governments, regional economic communities, and development partners to enhance opportunities to regional trading agreements and ultimately empower women.

This leaflet provides an overview of what UN Women does for women in the informal cross border trade, the gender challenges, promising practices so far as well as facts and figures that illustrate the important role women play in driving cross border trade and fueling economies.