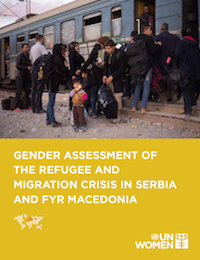 In 2015 over one million women and men sought asylum in Western Europe. The vast majority transited from Turkey to Greece and traveled through the Western Balkans to reach destination countries further north. For the countries of the Western Balkans, especially for fYR Macedonia and Serbia, this was the first time they were confronted with such a massive refugee flow since the Yugoslav wars.

This assessment, carried out in Fall 2015, explores the international and national response to the refugee crisis in Serbia and fYR Macedonia from a gender perspective.

The governments had to quickly scale up their response with the support of UN agencies and international organizations. This publication is a gender analysis of the response in fYR Macedonia and Serbia which looks at the main risks that women and girl refugees face; classifies the services available for women; determines which barriers exist to access services and information for women and recommends how gender issues can be mainstreamed in the national and international response.

Reparations for conflict-related sexual violence: Lessons from the Western Balkans